If for some reason the video above does not work you can try watching on youtube direct.

The UK has now passed legislation allowing Gay Marriage, to hear Sam’s views on this view the video from around 40 minutes. 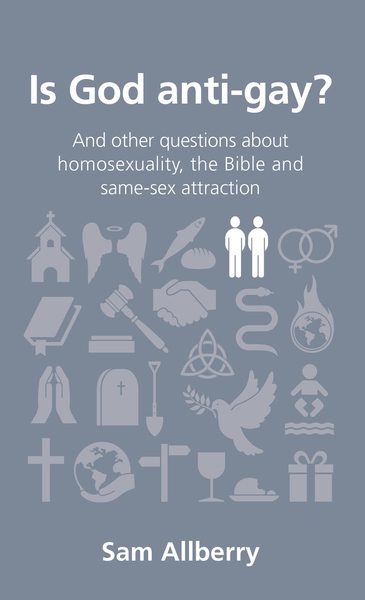 This video is a Google hangout with my friend Sam Allberry in which we discuss his brand new book Is God anti-Gay?

Sam is a Reformed Evangelical Minister in the Church of England who also experiences predominantly homosexual or same-sex attraction. I have known him personally for a few years now. I am thrilled to be able to have him join me for a live hangout. We will be discussing his own story, his experience of how Christians have reacted to his “coming out,” celibacy, and why many people don’t share their experiences in this area with others.

I hope you will enjoy our conversation and also read his book which explains a compassionate yet conservative response to homosexuality. This is a controversial subject among Christians and the World today. It is very important for us all to understand this issue better, whatever our opinions. It does us good to stop and to listen to the personal stories of those who have walked a sometimes challenging journey whether they have comet to the same conclusions as us or not. Sam’s makes an important contribution to a debate which sadly all too often descends into a heated argument between practicing homosexuals and married heterosexual Christians.

Here is my review of Sam’s book from Amazon:

My friend Sam Allberry has bravely spoken about his own struggle with same sex attraction, what he believes the Bible says about that, and his decision to live a celibate lifetyle as part of his devotion to Jesus Christ. The idea of anybody being willing to lay down his life in this way seems strange to the modern mind. But Allberry believes it is no sacrifice to him to do so. Too few people are able to really listen to those we disagree with, so read this whatever your view on the most controversial issue that today faces the Church and broader society (and their relationship).  You will not be disappointed and will understand Sam’s viewpoint better, and become more compassionate towards homosexuals.  A friend of mine reported that in his workplace he is the only one who has a traditional view of marriage and sexuality. He is also the only friend of the one openly homosexual there. In the world many homosexuals still face discrimination and even hate crimes. Imagine the impact if every homosexual felt the people that were most accepting and loving towards them were the Christians.

Sam and two other ministers with same-sex attraction were interviewed in this month’s Christianity magazine.

As well as his own book, Sam Allberry recommend Washed and Waiting, and Walking With Gay Friends, and two organizations: in the UK the True Freedom Trust and in the UK Aligned Grace Resources.

Another helpful resource is the debate between Andrew Wilson and Rob Bell.

July 12, 2013
It's not about the nail: hilarious marriage video
Next Post