Today’s post comes from chapter 3 of my new book Baptists in America: A History (Oxford University Press), co-authored with my friend and Baylor colleague Barry Hankins.

Baptist pastor James Manning of Providence, Rhode Island, wrote to English Baptist leader John Ryland in November 1776, apprising him of trouble in the American colonies. Two winters before, Providence’s Baptists had seen a prodigious revival, with perhaps two hundred people experiencing conversion within just a few months. But Manning thought the outbreak of war in Massachusetts in April 1775 brought an abrupt end to the revival: “the fatal 19th of April, the day of the Lexington battle, like an electric stroke put a stop to the progress of the work, as well as in other places as here. Oh horrid war! How contrary to the spirit of Jesus!” 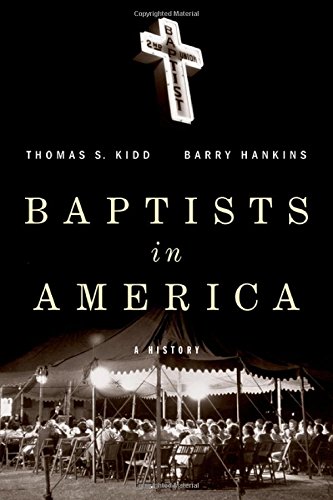 The Baptists saw a glimmer of hope, however, amidst the travail of war: hope for religious liberty. The Patriots’ paeans to liberty, Baptists hoped, might foster freedom in all spheres of life, including religion. Like many observers, the Warren Association of Baptists in New England rued the violence of the revolution, yet they also recognized that this was “a day of as great changes and events as perhaps were ever known in this nation. A time when the principles and nature of LIBERTY and GOVERNMENT have been very closely examined into, and wherein there appears the greatest encouragement of obtaining full and universal LIBERTY OF CONSCIENCE, that ever has since the first rise of the man of sin [the Roman Catholic Church].”

To these Baptists, religious liberty had suffered for more than a millennium under oppressive state churches, beginning with the conversion of Constantine to Christianity in the fourth century.  Now, they speculated, God might use the cataclysm of war to bring about full freedom of conscience.

Baptists were ambivalent about the American Revolution. Across America they lamented the tribulations of war, knowing that it smothered revival and paralyzed churches. And they recognized that the same Americans who clamored for liberty from Britain often denied religious freedom to dissenting churches. Could the Baptists trust the Patriot leaders? Over the course of the conflict, Baptists became more and more sanguine about its outcome. They were convinced that the American Revolution heralded liberty from Britain, but more importantly, liberty for the true gospel. As they embraced the war as a godly cause, some began to see the new American nation as a place uniquely favored by God.

Typical Baptist reactions to the Revolution paired focus on the rebellion with the quest for full religious liberty. Ultimately, a majority of Baptists supported the Revolution, but they also wanted disestablishment of the state churches as an outcome of the campaign for American freedom. No one better exemplified this blend of support for the Patriot cause and religious reform than Isaac Backus. Backus, the Baptists, and other evangelical dissenters pressured the New England governments for relief from supporting the established Congregationalist church.

Backus contended that the crisis with Britain represented a unique opportunity for disestablishment, because Americans’ paeans to liberty would be hypocritical if they continued to deny other Americans their own freedom. (Others made the same argument, even more pointedly, with regard to American slavery.) In his 1773 An Appeal to the Public for Religious Liberty, Backus asked how anyone could “reasonably expect that he who has the hearts of kings in his hand, will turn the heart of our earthly sovereign [King George III] to hear the pleas for liberty, of those who will not hear the cries of their fellow-subjects, under their oppressions?”

The First Continental Congress in Philadelphia presented a chance for Baptists to appeal directly to Patriot leaders for religious liberty. The Continental Congress began meeting in September 1774 in reaction to the Coercive Acts, which shut down the Massachusetts government and blocked Boston Harbor’s commercial ship traffic. Parliament passed these acts in response to the Boston Tea Party of late 1773, in which loads of British East India Company tea were dumped into Boston harbor. Backus and the Warren Association not only distributed copies of An Appeal to the Public for Religious Liberty to members of the Congress, but they also sent Backus and James Manning to Philadelphia to lobby for their cause.

In October 1774, Backus, Manning, and other Baptist pastors met with leaders of the Massachusetts delegation, including Samuel and John Adams (who were distant cousins). The Baptists presented their case for religious liberty and disestablishing the state church. But Samuel and John Adams were unsympathetic and asserted that the burdens of the establishment were so light as to hardly matter. Backus disagreed and pointed to times where the king of England seemed more concerned about protecting liberty for Baptists than did the Congregationalists. Samuel Adams became indignant at Backus, and “more than once insinuated that these complaints came from enthusiasts who made a merit of suffering persecution, and also that enemies to these colonies had a hand therein.”

The Massachusetts delegates ended the meeting by promising to keep the Baptists’ grievances in mind, but John Adams said to Backus that “we might as well expect a change in the solar system, as to expect they would give up their establishment.” This was a disappointing meeting – illustrative of Baptist reasons for hesitancy about independence – that heralded years of failure for the Baptists of New England. Although active persecution did stop, Massachusetts would keep a form of religious establishment through 1833, when the state finally became so pluralistic that even the Congregationalists became willing to abandon their status as the official church.

May 18, 2015
Wandering Over the Plains of the Nephites
Next Post

Frequently Asked Questions
Over the years, I've received tons of questions from readers about the...
view all Evangelical blogs
What Are Your Thoughts?leave a comment
Copyright 2008-2020, Patheos. All rights reserved.