Last week I described an “eating exercise” meant to encourage my students to think historically about the industrialization of food. It seemed to work well. Several of my students pointed out that not everything that is  technologically “advanced” is better. One wrote, “Compared to historical eating, modern eating is over-processed, over-sized, and over-consumed. We eat very few things that come straight from the earth. And when we do eat them, they are usually doused with sweeteners or dressings.” Others contrasted historical notions of beauty and desirability. Being too thin in ancient Rome, wrote one, would be “considered sickly.” Such women would not have been considered “excellent candidates for motherhood.”

But perhaps the most striking insights of my students had to do with their own habits. Many of the students observed how passively they move about the cafeteria, falling into unhealthy patterns and succumbing to easy temptations. This is particularly pervasive in a college cafeteria, they said, where the smorgasbord of unhealthy options is pervasive. Consider some of these horrifying excerpts from their papers:

But not all habits are unhealthy. Not all ritual is empty. Other students had habituated much healthier practices. One had grown up in a gluten-free and sugar-free family. Another ate so healthily that “sauces and condiments of almost any kind are inedible to me.” Yet another wrote, “I have not had a slice of pizza since I was five years old.” Many athletes in my course had adopted especially healthy habits of eating. They were the most articulate by far on the subject, having been exposed to health and nutrition instruction from their coaches.

The exercise itself seemed to prompt many students into more intentionally constructing healthier rituals. Most, after an initial shock, really enjoyed eating more intentionally and healthily. They felt better and more energized. Consider these excerpts:

I think this student is exactly right. And I hope that she—and the rest of my students—begin to think more historically about where their food comes from and more intentionally about how they will position themselves into the complex food chains in modern America. Perhaps the noncognitive elements of this exercise can supplement the historical narratives about food production and ultimately habituate healthier and more thoughtful eating practices.

March 31, 2016 American Colonial History
Recent Comments
0 | Leave a Comment
"I suspect the decline in church attendance may be primarily due to the congregations having ..."
an old scribe Sheep, Community, and Accountability: Lessons from ..."
"https://archive.org/embed/s... … I think we all should properly deal with the books like this one ..."
mcepl The Myth of the Men-Stealers
"As long as they keep strictly to God/Jesus 66 books of scripture."
D.M.S. A Very Not-So-Merry Christmas: How Protestantism ..."
"Informative and interesting. Thank you. This raises questions about the term Protestant Reformation."
an old scribe How the English Reformation was Named: ..."
Browse Our Archives
Related posts from Anxious Bench 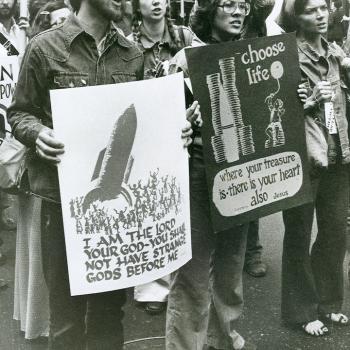