Does God Judge All Sin The Same?

Does God judge all sin as being the same? Are some sins greater and some sins less so?

Are there differing degrees of punishment in hell? If so, are these related to the sins that a person did? In other words, if a person commits a more heinous sin, are the repercussions worse? Jesus once said “But the one who did not know, and did what deserved a beating, will receive a light beating. Everyone to whom much was given, of him much will be required, and from him to whom they entrusted much, they will demand the more” (Luke 12:48). What is this “much” that has been given? Does it concern finances? Does it mean time or does it mean how much truth a person has been given makes them more responsible for receiving it? Perhaps, the more times a person has heard the gospel, the more accountable they will be before God because they intentionally chose not to act on that knowledge. It takes away their excuse as being “the one who did not know.” Hundreds of thousands of atheists who read Christian articles only for the purpose of attacking the article and the author are “receiving much,” and whether they know it or not make no difference to God. The “much” could be what we do with all our wealth, all our time, and all the truth we’ve been exposed to. But it could also mean that there will be differing degrees of punishment, indicating that God does not judge all sin as the same. Someday (soon?), all that Jesus was speaking about where much was given, He will demand even more at His appearance. 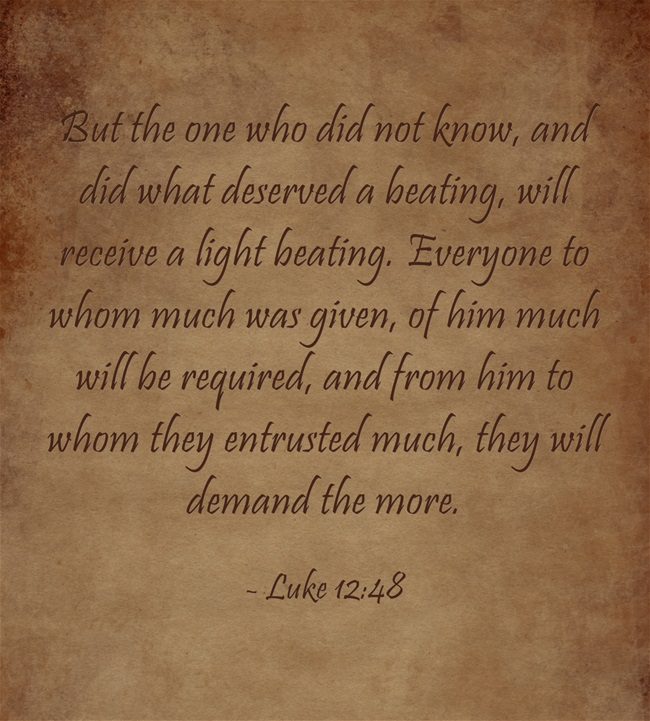 We are all accountable in the society in which we live. We are expected to obey those in authority over us and keep the laws of the land; at least where they don’t conflict with God’s Laws. So we are accountable to the society we live in and we are also accountable to our families and employers. If we intentionally leave work early and claim to have clocked out at a later time then that’s a pretty serious violation of company rules. It could get someone fired. But if you embezzled thousands of dollars from the company you could not only get fired, you could get sent to prison. Just as society have differing degrees of punishment for violations of the law, so too did God have differing degrees of punishment for violations of His law. The severity of the punishment would seem to indicate that God does not see all sin as being the same. In today’s world, if you murder someone, you’re going to be in prison for a long time and if you murdered someone in ancient Israel, you lost your life. Of course, not everyone was killed for just committing a minor infraction just as everyone wasn’t allowed to just pay a fine for breaking the law. Having said that, it only takes one sin to keep us out of the kingdom of heaven. It could be one single lie or we gossiped about someone. God hates gossip but He also sees adultery as considerably worse.

Not everything that God condemned was an abomination to Him but there were seven things that stood out to Him. These are the so-called Seven Deadly Sins, although I would rather call them the Seven Abominations but these are found in Proverbs 6:16-19 which includes “haughty eyes, a lying tongue, and hands that shed innocent blood, a heart that devises wicked plans, feet that make haste to run to evil, a false witness who breathes out lies and one who sows discord among brothers.” These seven sins have their root in pride, which causes Lucifer (Satan) to fall. These are bad enough but then Solomon spends considerably more space in writing about the severity of committing adultery in writing that “the price of a prostitute is only a loaf of bread, but a married woman hunts down a precious life” (Prov 16:26). Solomon asks the rhetorical question, “Can a man carry fire next to his chest and his clothes not be burned? Or can one walk on hot coals and his feet not be scorched” (Prov 6:27-28)? Obviously no! Instead of God saying this is an abomination, He pronounces immediate judgment: “So is he who goes in to his neighbor’s wife; none who touches her will go unpunished” (Prov 6:29).

As we have read, it only takes one sin, no matter how small, and you’re out of the kingdom so that’s a problem for us. We know we must be perfect to enter the kingdom of heaven as the Bible says that “nothing unclean will ever enter it, nor anyone who does what is detestable or false, but only those who are written in the Lamb’s book of life” (Rev 21:27) so what can anyone do? The answer is found in 2nd Corinthians 5:21 and it says it was “For our sake he made him to be sin who knew no sin, so that in him we might become the righteousness of God.” Problem solved! For everyone who has repented and trusted in Christ, they have all sins, great and small, taken away and are declared righteous in God’s sight. That’s what it takes to enter the kingdom.

As we have read, we know that God doesn’t see all sin as the same. He doesn’t see lying as equal to murder. He doesn’t see adultery as being the same as stealing. There are sins that are more grievous and those usually come with serious consequences. Today if you have not yet trusted in Christ, get rid of the sin issue. You can be saved today or you can be judged tomorrow (Heb 9:27).

October 21, 2015 Does God Know Our Thoughts and Silent Prayers?
Recent Comments
2 Comments | Leave a Comment
"Hi Cody. I just want to check on you to see how you're doing. :> ..."
Mish Top 7 Bible Verses To Help ..."
"Yeah and you are a God hater! End of story for you, and you will ..."
believe1009 What Does Oppressed Mean? A Biblical ..."
"Why, if Jesus did not die for negroes does the bible say in John 3:16 ..."
John Arthur Top 7 Bible Verses About Rapture ..."
"Do you hold to British Israel theory?"
John Arthur Top 7 Bible Verses About Rapture ..."
Browse Our Archives
get the latest from
Christian Crier
Sign up for our newsletter
POPULAR AT PATHEOS Evangelical
1

Demons!-- Part Twenty Eight
BEN: One of your most helpful qualifications comes on p. 190—“Though many...
view all Evangelical blogs
What Are Your Thoughts?leave a comment
Copyright 2008-2020, Patheos. All rights reserved.