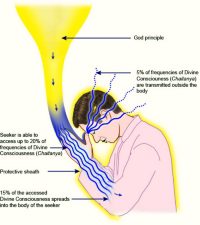 I completed the Atheist Prayer Experiment, 40 days of prayer that ended October 26. Roughly 70 atheists prayed for several minutes daily in a nonspecific way. This was basically a “Hello, anyone there?” to the spiritual world.

I blogged about that experience here, here, here, and here. “Unbelievable,” the radio show and podcast that hosted the project, discussed the results with Tim Mawson, the philosopher whose paper formed its foundation, in two parts (part 1 and part 2). I was interviewed for part 2.

I’d like to touch on some ideas that came out of the experiment.

First, the big question: did I find God(s)? No, I did not. But you can tell me if God tried to speak to me.

I’ve already mentioned a couple of interesting coincidences during the experiment, but I should report on something interesting that happened the day after the experiment was over. I was vacationing in Hawaii, and I stepped outside our rented condo. I noticed a leaf driven by upcurrents, and I caught it in midair. It was a clump of bougainvillea, three white petals stuck together.

Remember Francis Collins’ conversion story, where he turned a corner on a winter hike and saw a waterfall frozen into three columns? That suggestion of the Trinity was enough to convince him that God was speaking to him. And here, with the Prayer Experiment just completed, the wind (or perhaps the Holy Spirit?) pushes into my hands three petals in a clump. Three, yet one. (And guess what floor our condo was on.)

As you can imagine, this initially struck me as barely noteworthy. With some work, I was able to make it into a curious coincidence, but I see nothing supernatural about it.

Here’s part two: that afternoon, there was a magnitude 7.7 earthquake in the Queen Charlotte Islands in British Columbia that caused a tsunami that hit Hawaii about five hours later. We evacuated, though the tsunami turned out to be insignificant.

Some might say that God’s Hand calmed the seas. I say that it was an interesting adventure with a satisfactory natural explanation.

My conclusion: I’m glad I did the experiment so I can show that I’ve been open to the possibility of the supernatural, but it has only provided more evidence that it doesn’t exist.

(Maybe I wasn’t doing the prayers right? If every field has an associated particle—the famous Higgs boson is a consequence of the Higgs field, for example—perhaps prayers are conveyed by prayons, and I wasn’t capturing them properly. The photo above shows one view on how to improve the signal strength of prayer.)

A more substantive criticism of the experiment’s deist approach came from a commenter.

The “anonymous deity” profile you have in mind, which sort of uses comparative religion to abstract away all distinctives, seems to me scarcely even to allow for Zeus, but to allow for Zeus far better than YHWH. It seems like an exercise in averaging together the phone numbers of a lot of celebrities, coming up with the number 555-5555, and calling that. I don’t suppose anyone has that number, so I don’t suppose anyone will “answer.”

I come back to the simple, naïve, obvious question: why is the existence of God not obvious? Said from the other direction, why is the clear and plain absence of God insufficient evidence to show that he doesn’t exist? When you pray to a guy who desperately wants to have a relationship with you but get no reply, what can we conclude from that?

C.S. Lewis in The Screwtape Letters explains it this way:

The Irresistible and the Indisputable are the two weapons which the very nature of [God’s] scheme forbids Him to use. Merely to over-ride a human will (as His felt presence in any but the faintest and most mitigated degree would certainly do) would be for Him useless. He cannot ravish. He can only woo.

I meet new people all the time. Their forcing their existence on me is no imposition on my free will. Why pretend that it would be different for God? This is simply a clumsy argument to support Christian presuppositions. I almost feel embarrassed hearing some of these rationalizations, like watching someone in a play who’s forgotten his lines.

One suggestion that I received during the experiment was to just walk the walk. Act like a Christian for a while and you’ll slowly believe. Yes, I suppose that might work. I could suppress Reason and act more on Faith … but why should I do that? Why do that any more than you’d walk the walk of a Mormon or a Hari Krishna?

Similarly, I could try out crack or heroin. If I gave them a try, I just might like them. But why would I want to do that? Isn’t using reason the best way to see reality? I’ll believe things the old-fashioned way: because there’s sufficient evidence to convince me that they’re true.

Maybe prayer is an avenue, not to God, but to atheism. Mawson says that atheists are logically obliged to investigate the possibility of the supernatural, but most of us who were raised in a religious setting have already conducted our own prayer experiments. That’s why we’re atheists. Some ex-Christians never got the sense that God was answering prayers. Some discovered that God just stopped answering and then realized God was never there.

Imagine a world without God, where prayers are unanswered, where prayer is just you talking to yourself, where you only imagined that a loving deity supported you in adversity, where bad things happen to good people for no reason, where only wishful thinking supports the ideas of heaven and hell.

Open your eyes, because that’s the world you’re living in.

But this isn’t an anarchist’s paradise—it’s a world where people stand on their own two feet, where they live and love and grow, where every day ordinary people do heroic and noble things for the benefit of strangers. Where warm spring days and rosy sunsets aren’t made by God but are explained by Science, where earthquakes and hurricanes happen for no good reason, and people pitch in to help clean up afterwards.

We’re like a kid learning to ride a bike. Picture the parent running alongside holding the bike steady. The kid feels confident, but then the parent lets go without the kid realizing it. He still pedals along happily, perhaps even talking to the parent who’s fallen behind. Suddenly he’s shocked to find that he’s on his own, maybe shocked enough to fall. That belief was reassuring.

We’re also on our own. Is that realization debilitating or exhilarating? I can’t fault anyone raised in a Christian environment for not wanting to give up that omniscient and loving deity, but society simply can’t support large fractions of people ignoring reality.

Training wheels are for children. C’mon in, the water’s fine.

Prayer must never be answered:
if it is, it ceases to be prayer and becomes correspondence.
— Oscar Wilde

Suzanne Venker Versus Taylor Swift
I have rarely touched upon hateful female cultural enforcer who is just...
view all Nonreligious blogs
What Are Your Thoughts?leave a comment
Copyright 2008-2020, Patheos. All rights reserved.