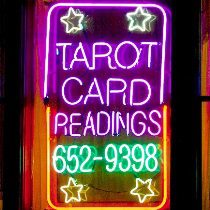 Most of my posts are something of an attack on Christians or Christianity, but this one is different. The atheists and Christians should be on the same side of the table on this one.

Karla McLaren had been a leader within the New Age community. She’d spent her life in that mindset and had written nine books on auras, chakras, energy, and so on. After she made the (surprisingly painful) trip from her world into that of a skeptic, she wrote an insightful article to help skeptics understand the hold that that kind of thinking can have on someone and the ways skeptics ruin any chance of constructive discussion (“Bridging the Chasm between Two Cultures”).

It’s like she’s been to another planet and is back to report.

The life of a New Age believer

McLaren says that she encountered New Age thinking in 1971 when her mother took up yoga and experienced relief from arthritic symptoms that she hadn’t gotten from conventional medicine. (Yes, sometimes yoga is the gateway drug.)

She says that personal experience taught her that much of New Age metaphysics was correct, but she also was skeptical of scams, fads, and cults such as “est, Scientology, breatharianism, [and] urine drinking.” She was able to use her skepticism to separate the accurate teachings from the false ones. If you’d demanded that she be skeptical of New Age thinking, she would’ve agreed and said that she already was.

She became a professional in the field, driven by a strong desire to help people. She believed every claim she made and never tried to scam anyone, and she says that the same was true of her colleagues.

The skeptical community? Not helpful.

But eventually she couldn’t dismiss the problems.

After a time, though, I began to question the things I saw that didn’t fit—the anomalies, the cures that didn’t work, the ideas that fell apart when you really looked at them, and so forth. I wrote passionately about the trouble I saw in my culture, and I even became a voice of reason. Sadly, though, every time I tried to research the things that disturbed or troubled me, I hit a wall.

She sought scientific critiques of New Age thinking but found two problems. First she was in too deep to accept the critique:

I couldn’t access any of that information because I simply couldn’t identify with it. Until now.…

The lion’s share of people from [New Age culture] can’t really hear much (if anything) from the skeptical culture. And that’s a real shame.

Problem 2 was that critiques of pseudoscience seemed unnecessarily harsh. For example, illusionist Uri Geller appeared several times on both the Merv Griffin show in 1973 and the Mike Douglas show in 1975. James (“the Amazing”) Randi responded to Geller’s popularity by publicly performing all of his tricks to prove that Geller’s claims of supernatural ability were lies.

You might think that that was that. How could Geller’s claims stand when they’d been shown to be mere stage magic? But McLaren saw these popular television shows vetting Geller’s abilities. She concluded,

Some people just had it in for healers and people with paranormal gifts….

James Randi’s behavior and demeanor were so culturally insensitive that he actually created a gigantic backlash against skepticism, and a gigantic surge toward the New Age that still rages unabated.

(This response is another example of the Backfire Effect, about which I’ve written recently.)

In a recent New York Times magazine feature on Randi, Geller recounted his humiliating experience on Johnny Carson’s Tonight Show. Randi had advised Carson how to avoid Geller’s deceptions. As a result, Geller sat there for 22 minutes on television, unable to do anything. Afterwards, he was certain that his career had been very publicly destroyed, but he was then booked immediately for his first Merv Griffin appearance. The public failure actually made his career.

I certainly understand and support James Randi’s anger, frustration, and even vitriol now (especially after having lived through the New Age for so many decades), but all I could see then was a very sarcastic man who seemed to attack Geller personally.

She says that within New Age culture, personal attacks come from someone ruled by their emotions, and serious skepticism comes from someone ruled by their intellect. Neither extreme is acceptable, and New Agers focus instead on “the (supposedly) true and meaningful realm of spirit.” Randi might have helped dabblers steer away from some New Age thinking, but by showing that he didn’t understand or care about their culture, Randi did nothing to dissuade serious believers.

Mystery in the New Age community

Within this community, it’s popular to imagine that skeptics have no tolerance for mystery while New Agers do, but she now says that this is backwards.

We love to say that we embrace mystery in the New Age culture, but that’s a cultural conceit and it’s utterly wrong. In actual fact, we have no tolerance whatsoever for mystery. Everything from the smallest individual action to the largest movements in the evolution of the planet has a specific metaphysical or mystical cause. In my opinion, this incapacity to tolerate mystery is a direct result of my culture’s disavowal of the intellect. One of the most frightening things about attaining the capacity to think skeptically and critically is that so many things don’t have clear answers. Critical thinkers and skeptics don’t create answers just to manage their anxiety.

Most Christians are just as skeptical about poorly evidence claims as atheists are—when they choose to be.

Let’s draw some lessons from this, both for the Christian and the atheist, in part 2.

We are a people, not a problem.
— Karla McLaren,
about the New Age community