White Supremacy Is Rooted in Fear 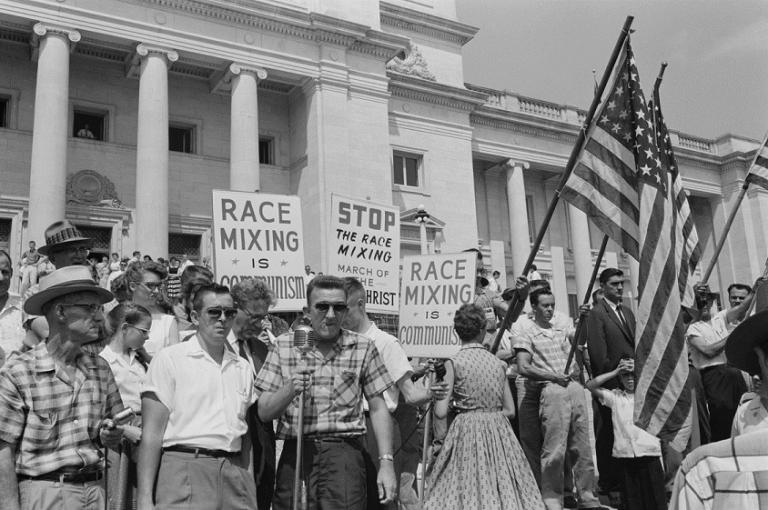 I’ve written about the bright winds of demographic change coming to America. The conservative white Christians who wielded almost total power for centuries are fading away, and the country is becoming more diverse, more liberal and more secular.

This is a change we should applaud. Practically, it means that the oppressive power of the religious right will weaken, and there will be a stronger constituency for progressive policies. Aspirationally, it represents a step toward the fulfillment of the promise America has often made but rarely kept: a nation of immigrants, a beacon of freedom to the world, where the First Amendment protects everyone’s right to believe or not believe as they see fit.

However, the American Ancien Régime isn’t going away quietly. They can see the demographic brick wall they’re hurtling towards just as well as we can, and they’re beginning to panic.

Now, I know that the left and all the little gatekeepers on Twitter become literally hysterical if you use the term “replacement,” if you suggest that the Democratic Party is trying to replace the current electorate, the voters now casting ballots, with new people, more obedient voters from the Third World. But they become hysterical because that’s what’s happening actually. Let’s just say it: That’s true.

…If you change the population, you dilute the political power of the people who live there. So every time they import a new voter, I become disenfranchised as a current voter… I have less political power because they are importing a brand new electorate. Why should I sit back and take that? The power that I have as an American guaranteed at birth is one man, one vote, and they are diluting it.

In short, Carlson is asserting that he has a constitutional right to enjoy a permanent majority for his views. If people he doesn’t agree with are permitted to vote, and if this causes the side he favors to lose an election, he’s been disenfranchised.

On its face, this is a ludicrous claim. In a democracy, being enfranchised means you have the right to vote – not the right to win. But among the right, the factual status of a claim rarely matters. What matters are the sentiments it provokes, the way it makes its audience feel.

In Carlson’s case, those sentiments are clear, especially given the dogwhistle about “voters from the Third World”. What he’s saying, with only the flimsiest attempt at disguise, is that white people deserve to be in charge, deserve to rule forever, and that non-white people shouldn’t be allowed to become citizens or to vote.

This is the voice of white supremacy that’s spoken through the ages, from enslavers to the KKK to Jim Crow. This is the same rhetoric and ideology as the tiki-torch-wielding Nazis who marched in Charlottesville, chanting, “Jews won’t replace us!” Carlson just tidied it up a little for TV audiences.

Nor is it only him who’s started talking this way. Republican senator Ron Johnson claimed that Democrats “want to remake the demographics of America” to stay in power. This is a tacit confession of his own and his party’s racism, because if Republicans weren’t anti-immigrant, there’s no reason why more immigrants would change the political balance!

And, going another step down the ladder, two of the worst Republicans in Congress (and that’s really saying something), Marjorie “Jewish Space Laser” Greene and Paul Gosar, floated the idea of an “America First Caucus” which would promote “Anglo-Saxon political traditions” and the idea that “societal trust and political unity are threatened when foreign citizens are imported en-masse into a country”.

This is an especially shrill dogwhistle. As Adam Serwer explains, the appeal to “Anglo-Saxon” heritage was an idea made up by early-20th-century racists to argue that Italian, Irish, Jewish, and eastern European immigrants weren’t really white and thus weren’t truly capable of self-government.

This was a bridge too far even for Republicans, and Greene scrapped the plan after withering criticism. But racists like this are always feeling for where the line is, testing what they can get away with. You can be sure they’ll try again or resurrect the same idea in a slightly different form.

The Republican party’s bearhug of white nationalism is playing out across the country, in the onslaught of voter-suppression laws in states where conservatives control the legislature. It’s a last-gasp effort to cling to power as the voting public’s demographics shift under them. Just as in the era of Jim Crow, their goal is to enshrine permanent minority rule.

It’s not that any of this is new. The GOP has been the home of white supremacists since the days of Nixon’s Southern Strategy. But what has changed is how overt they’ve become about it. Until recently, conservative leaders accepted racists’ support while trying to keep them at arm’s length.

But Donald Trump dragged that strategy into the open – like when he said, “Our country is full” as an excuse to turn away migrants and asylum-seekers – and even though it cost him re-election, his rhetoric proved so wildly popular with the base that future conservative candidates are certain to echo it.

However, even Trump was only a symptom of something larger. He, and those like him, arose from and were shaped by white conservatives’ deep-rooted anxiety. For all their outward confidence and belligerence, theirs is a worldview founded on fear.

They know they’re fading and dying and the world is leaving them behind, but what they’re afraid of goes deeper than that. It’s deeper, even, than the fear of losing the power they once enjoyed and the wealth and status that came along with it.

Simply put, their fear stems from the knowledge that they’ve wielded their power unjustly all this time. Leaders who governed well and treated others fairly aren’t concerned about handing the reins to a successor. But Christian conservatives know – even if they’ll never, ever admit it – that in their days of dominance, they’ve been greedy, oppressive, callous and cruel. That’s why they’re so terrified at the thought of becoming a minority. What they fear the most is that they’ll wind up on the other end of the unjust systems they constructed.

Image: A 1959 protest against school desegregation in Little Rock, Arkansas. One of the signs reads, “Stop the Race Mixing March of the Anti-Christ”. Public domain, via Wikimedia Commons.

April 23, 2021 Commonwealth, II.XXXVIII: Praxis
Recent Comments
0 | Leave a Comment
"See John Zande's "The Owner of All Infernal Names", available on Amazon (Satan incarnate right ..."
basenjibrian Why Would God Drown Children?
"“...including children”😢"
Juniper When Religious Rituals Turn Deadly
"I read the Wikipedia article 'Stampede', and it mentioned academic experts opposing this particular use ..."
J-D When Religious Rituals Turn Deadly
"It's not surprising that people are interested in the question. It is interesting, in a ..."
J-D Why Would God Drown Children?
Browse Our Archives
get the latest from
Daylight Atheism
Sign up for our newsletter
POPULAR AT PATHEOS Nonreligious
1