On that “tolerance” video: “The gospels suggest that Jesus would not have endorsed the priest’s methods”

On that “tolerance” video: “The gospels suggest that Jesus would not have endorsed the priest’s methods” August 21, 2012 Deacon Greg Kandra 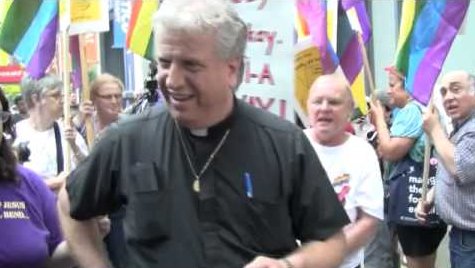 This video, posted over a week ago—showing what happened to a Catholic priest who prayed outside a Chick-fil-—has generated a lot of heat.  And now Elizabeth Scalia sheds some light:

It is difficult to feel sympathy for Father O’Reilly; his actions toward the gay activists were intentionally provocative, which rendered his mumbles about “tolerance” insupportable.

It’s one thing to stand away from a protest, praying, and have the protesters come after you; there, you might legitimately ask, “Where’s the tolerance”? It’s quite another—and a patently disingenuous thing—to invade a protest circle with your vocal prayers and then wonder that you are unwelcome there. Whatever his motives might have been, the Gospels suggest that Jesus would not have endorsed the priest’s methods. Jesus lived among the people he wished to evangelize. He met with them as people, and he ate with them, or he served them. He attracted converts with his love and his stability. Jesus did not burst in where he was not welcome and start praying at people (or for them) in a way that could be regarded as both separatist and condescending by the very people he wished to engage. He pointedly urged sympathy for the publican, not the Pharisee.

As this video hits my email again, and again, I can’t help but wonder if the offended senders would be writing, “so much for ‘tolerance’” in their subject lines if their own peaceful gatherings, at church or at a kid’s soccer game, were intruded upon by a gay person or an atheist with a clear intent to showboat and provoke. I don’t think they’d appreciate it.

Check out the rest of her column over at First Things.

August 21, 2012 Roller coasters? Meh.
Browse Our Archives
get the latest from
Catholic
Sign up for our newsletter
POPULAR AT PATHEOS Catholic
1