A pope named after a deacon

A pope named after a deacon March 14, 2013 Deacon Greg Kandra

An alert reader sent this my way. This was something that popped into my head during yesterday’s excitement, but quickly evaporated (like so many things in my head). 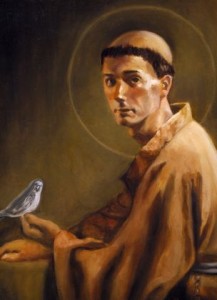 St. Francis himself was a deacon and as the Catholic Encyclopedia says.

So great, indeed, was Francis’s reverence for the priesthood, because of its relation to the Adorable Sacrament, that in his humility he never dared to aspire to that dignity.

So we have a Pope named after a deacon. This might seem odd and it struck me that way at first, but really it is also highly appropriate. Since “Deacon” means “servant” and one of the pope’s titles is “Servant of the servants of God (Latin: servus servorum Dei).”

So far from what I have read the new Pope’s humility is rather obvious and lived out. It also takes a rather audacious humility to choose St. Francis as a regnal name. A name rather hard to live up to as St. Francis so closely imaged Christ. Yet really that is what we are all called to do. Plus it is not that we try to imitate some saint, but that we imitate Jesus who they tried to image.

Lest we forget: for many centuries, it was not uncommon for the pope to be chosen from the order of deacon (Gregory the Great being a notable example).  I don’t think we’re in danger of returning to that custom any time soon.

From the evidence so far, I’d say we have a pope who embodies, beautifully, the spirit of diakonia.  (Need further proof?  We have this memorable image of Pope Francis washing feet on Holy Thursday, and wearing a deacon’s stole.)

March 14, 2013
The first homily of Pope Francis
Next Post

March 15, 2013 Archbishop Chaput to let girls play CYO football
Browse Our Archives
get the latest from
Catholic
Sign up for our newsletter
POPULAR AT PATHEOS Catholic
1