A Priest Writes: “A New Translation Cannot Be Expected to Accomplish Everything” —UPDATED

A Priest Writes: “A New Translation Cannot Be Expected to Accomplish Everything” —UPDATED May 22, 2013 Deacon Greg Kandra 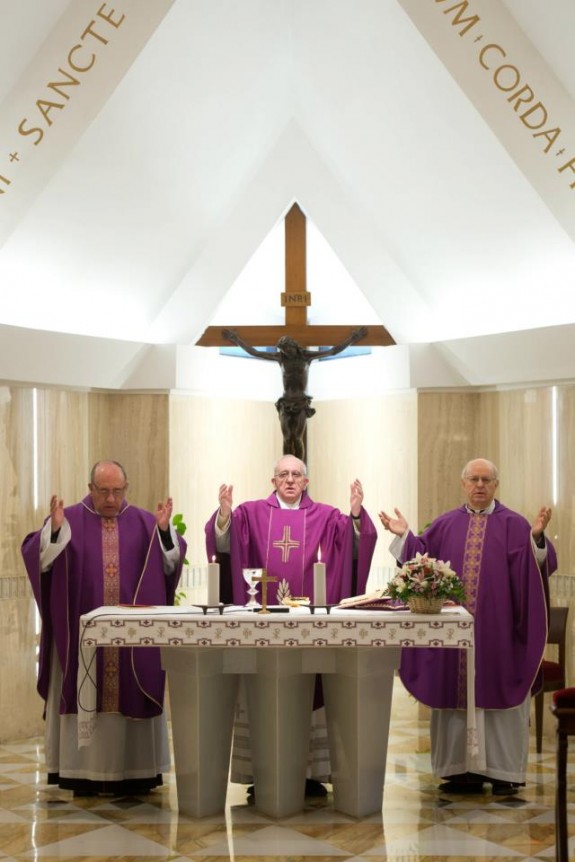 After reading this latest post on how priests reportedly dislike the new Missal, a priest friend dropped me an email to share his impressions:

One of the things going on here is very important, but I suspect most priests have never thought about it.

I concelebrated at a Funeral Mass with an older priest (about 75) about four months after the new Missal came into use. I was the main celebrant. His parts were reading the Gospel and the sections of the Eucharistic Prayer given to concelebrants.

He did this with real difficulty, the reason being that he kept trying to look at the congregation as he read. This is much easier with the older, easily memorized text. This book keeps you needing to read from it.

Most priests do not seem to ever have thought about the nature of ritual at all. The priest who comes out on the altar and greets the folks in his own colloquial way, and then starts the Mass with the text, doesn’t ealize that there IS a greeting in the Mass. He speaks in “real life” and then retreats to the formal worship. He does so at the end as well. “Have a nice day!”

This priest I concelebrated with did not seem to realize that in the Eucharistic Prayer we are speaking to God, not the congregation.

I believe that putting the priest celebrant behind the altar facing the people was a very serious, core error. When I celebrate the Traditional Mass or the Anglican Use liturgy (which is generally celebrated with the traditional altar ceremonies), I come before the altar, face it in the same direction as the people, and begin Mass by addressing Him. I submit myself to the rite; the people submit themselves to the rite. We participate together.

The Novus Ordo has made the priest the focus. He starts by initiating a dialogue with the people. He keeps up this dialogue throughout the Mass. He stands behind the Altar like Julia Childs doing a cooking demonstration at her kitchen island.

Subtly but pervasively this has changed our whole approach to worship. The new book is demanding the priest’s attention; its language is deliberately not colloquial. As far as many priests are concerned, worship should be informal, colloquial. They do not even question this.

I like to go to confession at [a church] in NYC, where confessions are heard at 5 PM daily. There’s a 5:30 PM Mass following, which I generally like to attend (in the pew, pretending I’m a Real Person). But lately there is an older priest, in his eighties, celebrating that Mass. The other day he got to the altar, wished us a “Good Afternoon,” told us about the weather, mentioned stuff about the Gospel, then said, “We begin our celebration as always in the Name…”

Um, no. We don’t begin that way at your Mass, Father. Never. We get the warm-up monologue. And interjections throughout. “My beloved, the Lord be with you…”

There are awkwardnesses in the Missal, but it’s being scrutinized in an atmosphere which assumes cafeteria English is the ideal for public worship. There are many excellent things in the new Missal. The texts for funeral Masses are immeasurably richer. The old Sacramentary’s vapid, contentless prayers over the gifts and postcommunion prayers, not to mention Masses for Various Occasions, are totally transformed in the new book.

To me, the saddest comment I could make on this is that the serious problem of the turgid RNAB translation in the Lectionary never even seems to be noticed. Yesterday’s Gospel, in which Jesus takes a child and places “it” in their midst, is a wonderful commentary on a pro-life Church’s appreciation of language!!

A new translation cannot be expected to accomplish everything. Only with time will we recover a sense of the difference between going to the Altar of God and singing around the camp fire.

UPDATE: A catechist wrote to share with me his dissenting opinion of the view expressed above:

This priest’s email epitomizes what frustrates me about the mentality permeating too many seminaries and rectories. It’s a reduction of the Mass to altar sacrifice, and a complete dismissal of it as community meal.

The Catholic Mass is, by its nature, a hybrid ceremony (every element of which is conscripted from Jewish worship). We begin with a solemn Penitential Rite that would sound incredibly familiar to anyone who’s ever gone to Kol Nidrei, move on to readings from Scripture and singing of Psalms, followed by exegetical midrash (a sermon), before proceeding to the Liturgy of the Eucharist, which is itself a synthesis of the Levitical sacrifice at Temple and the Seder meal celebrated by Jesus with his friends.

But the only thing many people think about when they hear the word “Mass” is a mysterious, cosmic sacrifice at altar–one which can’t possibly command sufficient reverence or awe.

The God-who-is is already transcendent and abstract enough, just being the ontological source of all existence. The God-who-took-on-our-humanity is radically immanent for a reason–the Incarnation took place that we might be able to relate to God in a mind-blowingly intimate and personal way. Putting the Mass back up in the clouds and reducing Eucharist to transubstantiation is an enormously problematic, if well-meaning, disservice. We are called not simply to receive the Eucharist, but to BE the Eucharist. We are called to LIVE as a Eucharistic people every moment of our week, not simply experience the Eucharist on our tongue or in a monstrance, for a few minutes at a time.

And, oh by the way, can we PLEASE stop running roughshod over the Liturgy of the Word, as though it’s the undercard of a pay-per-view fight or the local opening act for a big name headliner? “In the beginning was the Word, and the Word was with God, and the Word was God.” The Gospel authors record Jesus celebrating the Passover Meal with his disciples only once, but they record him having dozens of informal meals with friends. Moreover, they show him spending the vast majority of his public ministry PROCLAIMING the WORD and unpacking it in a simple, accessible way that gave it meaning for people in their practical, day-to-day lives!

Note to liturgists: Jesus’ words were literally vulgar (in the textbook definition sense) and colloquial! The people of Galilee didn’t speak the high Greek of the Lyceum! He talked about shepherds and vineyards and fishing nets, and I guarantee you that his audience would’ve looked perplexed if he’d claimed to be “consubstantial with the Father”!

May 22, 2013
Ordination Update: 20 New Deacons for Cincinnati
Next Post

May 22, 2013 Fugee Update: "This Type of Thing Cannot Happen Again"
Browse Our Archives
get the latest from
Catholic
Sign up for our newsletter
POPULAR AT PATHEOS Catholic
1