A San Quentin prisoner sentenced to life for his role in a double murder when he was just 17 was one of four inmates confirmed by Archbishop Salvatore J. Cordileone Sunday, March 9, at the prison chapel.

In an interview with Catholic San Francisco following the Mass where he and three other men were confirmed and a fifth received first Communion, Kent Wimberly, 52, talked about coming to faith in a prison environment and finding what he’d been looking for where he least expected it – inside the doors of the Catholic Church. His Catholic sponsor, John Grein, 54, a fellow inmate who is also serving a life sentence for murder, joined him for the conversation in the chapel library.

Both men come from Protestant faith communities. Asked what drew them to the Roman Catholic Church, the pair answered in near-unison: “The Eucharist.”

“I always felt there was so much more to Communion than a purely symbolic gesture,” said Wimberly, who was raised in a Bible-reading, churchgoing Protestant home in San Diego.

Grein grew up Catholic and became an ordained Protestant minister in prison. He returned to the Catholic Church 10 years ago.

In 2005, 26 years after Wimberly’s conviction for participating in the murder of his best friend’s parents, he said he experienced the assurance of God’s love for the first time while on a Kairos prison ministry retreat at the Richard J. Donovan Correctional Facility in San Diego. He admits that what he had most wanted from the retreat at the time was the attendance certificate that could improve his chance of parole. He got the certificate and more.

A Zen Buddhist at the time, Wimberly was nonetheless open to the possibility of an encounter with God.

He recalled sitting motionless with his eyes closed and asking God to reveal himself if he was “for real.” He said he sensed a tiny dot of light near him grow larger and brighter until, he said, “it filled me up so much I literally thought I was about to die.”

“The way I see it, I received a pinhole vision of heaven,” Wimberly said. “I met Christ that day.”

Given his upbringing, Wimberly said his inclination at that point was to connect with a prison community with a “fundamentalist bent.” He finished Bible college, taught Bible classes and thought he was content until he got an impromptu invitation to meet someone at the prison’s chapel and was talked into attending Mass for the first time.

“It just felt like it was where I was supposed to be,” he said.

March 20, 2014 Report: Russell Crowe meets Pope Francis
Browse Our Archives
get the latest from
Catholic
Sign up for our newsletter
POPULAR AT PATHEOS Catholic
1 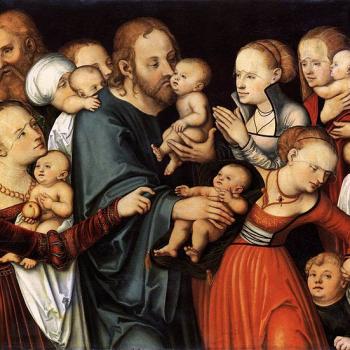