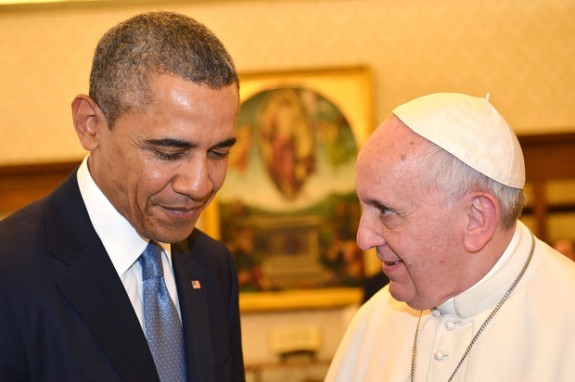 A visibly energized President Barack Obama held a nearly hourlong audience with Pope Francis at the Vatican on Thursday, expressing his great admiration for the pontiff and inviting him to visit the White House.

Although Obama and the church remain deeply split over abortion and contraception, Obama considers the pontiff a kindred spirit on issues of economic inequality, and their private meeting in the Papal Library ran longer than scheduled. After they emerged to cameras, Francis presented Obama with a copy of his papal mission statement decrying a global economic system that excludes the poor. Obama said he will keep it in the Oval Office.

The president and pope both appeared tense at the start of the audience, when they initially greeted one another, but then were all smiles by the end of the meeting and seemed to have found a rapport, though they spoke through interpreters.

“It is a great honor. I’m a great admirer,” Obama said after greeting the pope with a slight bow as they shook hands. “Thank you so much for receiving me.”

Obama arrived at the Vatican amid all the pomp and tradition of the Catholic Church, making his way in a long, slow procession through the hallways of the Apostolic Palace led by colorful Swiss Guards and accompanied by ceremonial attendants. The president bowed as he shook hands with the pontiff in the Small Throne Room, before the two sat down at the pope’s desk, as is custom for a papal audience.

The two were scheduled to meet for just half an hour, but their private discussion lasted 52 minutes. At the end, they exchanged gifts, with the pope offering Obama two medallions and a copy of his apostolic exhortation “The Joy of the Gospel.”

“You know, I actually will probably read this when I’m in the Oval Office, when I am deeply frustrated and I am sure it will give me strength and will calm me down,” Obama said.

“I hope,” the pope responded.

UPDATE: The Vatican statement on the meeting:

Please find below the full English text of the statement released by the Holy See press office on Thursday:

This morning, 27 March 2014, the Hon. Barack H. Obama, President of the United States of America, was received in audience by His Holiness Pope Francis, after which he met with His Eminence Cardinal Pietro Parolin, Secretary of State, and Archbishop Dominique Mamberti, Secretary for Relations with States.

During the cordial meetings, views were exchanged on some current international themes and it was hoped that, in areas of conflict, there would be respect for humanitarian and international law and a negotiated solution between the parties involved. In the context of bilateral relations and cooperation between Church and State, there was a discussion on questions of particular relevance for the Church in that country, such as the exercise of the rights to religious freedom, life and conscientious objection, as well as the issue of immigration reform. Finally, the common commitment to the eradication of trafficking of human persons in the world was stated.

March 27, 2014 Are we living this Lent as if it were our last?
Browse Our Archives
get the latest from
Catholic
Sign up for our newsletter
POPULAR AT PATHEOS Catholic
1