Do you use intinction?

I’ve never see this done in parishes around the United States, but Fr. Z took note of this practice during yesterday’s big wedding Mass at St. Peter’s:

His Holiness, again, did not seem to distribute Communion. He doesn’t, you know. However, deacons distributed under both kinds and by intinction.

Thus, no Communion in the hand.  Nota bene: they are kneeling. 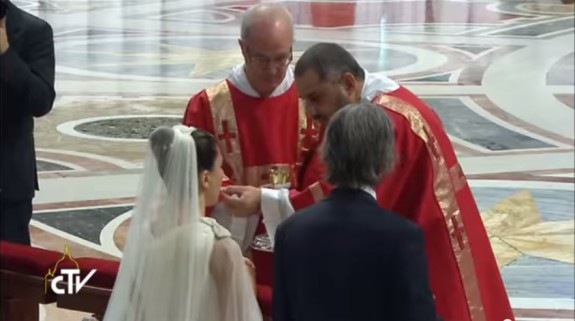 You can read more about the practice of intinction here.  Additional information and insight here.

Once in a great while—it’s only happened two or three times that I can recall—someone will approach me if I am ministering the cup. They’ll hold up the host they’ve received and ask if they can dip the Body of Christ into the Precious Blood. As noted in the GIRM above, that’s not the way it’s supposed to be done, and I’ve always directed otherwise:  “Consume the host and I’ll give you the cup.”  But this is rare.

Anyone else have experience with intinction?

September 15, 2014
Can The Rule of St. Benedict save inner city schools?
Next Post

September 15, 2014 This could make me want to take up golf
Browse Our Archives
Related posts from The Deacon's Bench