The definitive survey of religious beliefs and affiliation in America has been released for 2014 and it finds that the clear trend toward more and more people defining themselves as “none” continues. Since 1990, that demographic group has grown steadily from about 6-7% to now 21%. 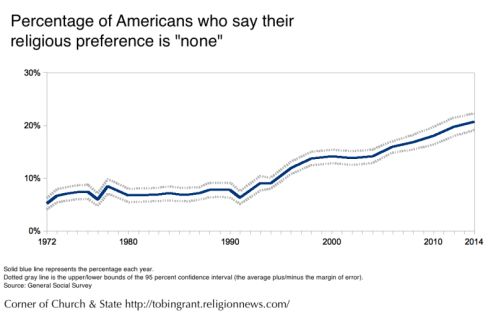 Tobin Grant, a political scientist who studies this question, says:

A new survey shows that the Great Decline of religion in America continues. Since 2012, the U.S. has about 7.5 million Americans who are no longer active in religion.

Last week, the 2014 General Social Survey (GSS) was released. The GSS is the gold standard for sociological surveys. Funded by the National Science Foundation this multi-million dollar study gives us the most accurate data on American society — including religion.

When asked their “religious preference”, nearly one-in-four Americans now says “none.”Up until the 1990s, this group of so-called “nones” hovered in the single digits. The 2014 GSS showed that the so-called nones are 21 percent. How large is this group of nones? There are nearly as many Americans who claim no religion as there are Catholics (24 percent). If this growth continues, in a few years the largest “religion” in the U.S. may be no religion at all.

Being a “none” does not, however, mean they’re atheists or agnostics. Most of them still believe in some sort of God or spirit, but they don’t affiliate with any religion. 34% of Americans never attend church and the number of people who say they don’t pray has also gone up.

March 17, 2015 Fischer's Bizarre Argument Against Bilingualism
Recent Comments
52 Comments | Leave a Comment
"JALY5vN.org"
aditi New Fox Anchor a Q Anon ..."
"Your argument is "Things exist, therefore God," and you just simply believe that there has ..."
Alex Zer0 And Yet Another Stupid Atheist Meme
"Oh hell. Just now got back here. Requiescat in pace, Ed, or just feed the ..."
(((Hornèd Pontilibratificus))) Saying Goodbye for the Last Time
"So many religious comments from muslims and the atheist religion..."
Drakenfly Carson: Islam Not a Religion, but ..."
Browse Our Archives
get the latest from
Nonreligious
Sign up for our newsletter
POPULAR AT PATHEOS Nonreligious
1