Stupid Atheist Meme of the Day

I’ve decided to do a new running feature here at Dispatches, in which I debunk and ridicule stupid memes I see being shared by my fellow atheists. I see them so often that I could make a whole blog out of just that idea. Here’s the first one: 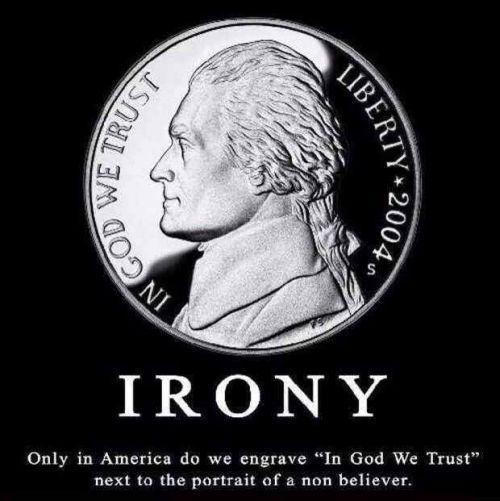 All nonsense. Thomas Jefferson was not a “non-believer,” unless they’re using that term to mean “non-Christian,” and that’s really stupid because that would make adherents of every other religion non-believers. Thomas Jefferson absolutely believed in God. He wrote volumes on the subject, almost all of it in private letters to friends. Christopher Hitchens and Richard Dawkins (drawing on Hitchens) have both suggested that Jefferson was secretly an atheist, but — now prepare to clutch those pearls, hero worshipers — they were completely full of shit. You will not find any historian who would accept such a claim, and for good reason.

March 28, 2015
Wiles: Come and See the Violence Inherent in the System!
Next Post

March 29, 2015 Was Ted Cruz' Announcement Illegal for Liberty U?
Recent Comments
108 Comments | Leave a Comment
Browse Our Archives
get the latest from
Nonreligious
Sign up for our newsletter
POPULAR AT PATHEOS Nonreligious
1