Jennifer Roback Morse, director of the furiously anti-gay Ruth Institute, says that gay people don’t show any courage by coming out. No, it’s the gay people who don’t want to be gay, they’re the real Brave Heroes. She said this while criticizing President Obama for daring to talk about young people coming out to their parents during the State of the Union address.

Obama “talked about the courage required for a young guy to come out to his parents,” she said in an interview with the “Issues, Etc.” podcast on Thursday, “completely omitting the fact that right now coming out does not require as much courage as is required by a person who says, ‘You know, I feel same-sex attraction, but what I want to do is not act on it, what I want to do is live up to my church’s teachings, what I want to do is walk away from the gay lifestyle that I’ve been living, that’s what I want to do.’ Now, that person, that takes a lot of courage to talk like that in today’s world, but Obama didn’t mention any of those people.”

The president’s mention of parents changing their previous beliefs to embrace gay children, she added, was “tacitly putting every adult in America, every Christian in America, every Lutheran, every serious Jewish person, at war between their religious beliefs and their love for their children.”

“Well, our religion teaches that if you love somebody, you have to live in the truth with respect to them and you have to help present them the truth,” she said. “You aren’t doing anybody any favors by accommodating their desires even if their desires are not necessarily good for them.”

Yeah, because it’s straight people who are so terribly discriminated against. Pardon me, my eyes just rolled into the other room. And then she made this inane argument:

Morse was also outraged that the president invited Jim Obergefell, the lead plaintiff in the Supreme Court case that struck down same-sex marriage bans nationwide last year, to the State of the Union. Morse appeared to be unfamiliar with Obergefell’s story — he and his partner of 20 years got married in a plane on an airport tarmac in Maryland shortly before his partner died of ALS — suggesting that Obergefell’s marriage wouldn’t last.

“Well, he’s trying to say, obviously he’s trying to treat Obergefell as a hero, as a Rosa Parks type figure or something like that,” she said of the president. “I would have been more impressed if he could have invited the Goodridges [the plaintiffs in the landmark 2003 Massachusetts marriage equality ruling] … but the Goodridges are no longer married to one another. So it will be interesting to see if Mr. Obergefell remains married to his true love there for whom we redefined marriage for the entire country.”

Yeah, because straight people getting married is obviously a strong argument against allowing them to get married. Dumbass.

January 21, 2016
Cass: Only Christian Men are Qualified for Public Office
Next Post 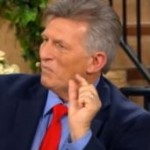 January 22, 2016 Wiles: The UN is Going to Invade the United States!
Recent Comments
0 | Leave a Comment
Browse Our Archives
get the latest from
Nonreligious
Sign up for our newsletter
POPULAR AT PATHEOS Nonreligious
1