Bolling: It’s Only Terrorism When a Muslim Does It

Bolling: It’s Only Terrorism When a Muslim Does It June 19, 2016 Ed Brayton

Eric Bolling, the third dumbest man on Fox News (behind Steve Doocy and Brian Kilmeade), gave an ignorant diatribe about President Obama “politicizing” the Orlando massacre but makes clear that if a Muslim does it, it’s terrorism; if a white American does it, it’s only “mass murder.”

ERIC BOLLING (CO-HOST): Basically I asked, you represent all of us. You represent those on the right and those on the left. We know where you are politically. Can you just take an hour or half hour or 20-minute speech and give condolences to the family members and the first responders and leave the politics out. He didn’t do much of that. He did some of the condolences with the family members, and then he got very political. There was a lot of politics in it. Greg points out that the two lines together that he said that I’m sitting in the green room listening, my head was exploding. He said although the motives may have been different in this act, the instruments are the same. That’s code for, this wasn’t terror, this wasn’t a terror plot, this wasn’t like the others, it’s all about the guns. Now, the problem is, Mr. President, the motives were the same. This guy, Mateen had the same motive as the Tsarnaev brothers, as Farouk in San Bernardino, as Nidal Hasan in Fort Hood. It was all radical jihad, it wasn’t a mass murder. Yea sure Lanza up in Connecticut, it was a mass murder and in Colorado, it was a mass murder. I get that, there are those. But there are also terrorist events. This was a terrorist event.

Most terrorist attacks in this country are by Christian extremists, not Muslim extremists. But both are terrorism. Not for Bolling, though. And then there’s this:

President Obama ended with a heartfelt outreach to the gay community. I think that was fine except for the fact that the progressive left is the single biggest threat to the LGBT community because — of this and we all know, we all know that under Sharia law, there is no room to be gay. It’s just, if you’re gay, you either have to become not gay or you die.

What does that have to do with anything? There is zero chance that we will have Sharia law in this country. Absolutely none. 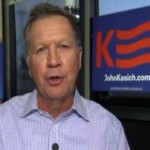 June 19, 2016 GOP Delegates Look for Way to Stop Trump
Recent Comments
0 | Leave a Comment
Browse Our Archives
get the latest from
Nonreligious
Sign up for our newsletter
POPULAR AT PATHEOS Nonreligious
1