The Terrifying List of Bigoted Attacks Since Election Night

Raw Story is keeping a list of all of the bigoted, criminal and violent attacks on gays, blacks, Muslims, women, Latinos in others since Donald Trump was elected on Tuesday night. The list is growing by leaps and bounds with every hour that passes.

It includes this one from a town not far from me:

School officials are investigating reports that students at DeWitt Junior High School targeted minority classmates with racially charged chants Wednesday, and, at times, locked arms to create a “wall,” a reference to the wall President-elect Donald Trump has promised to build between Mexico and the United States…

Deiter confirmed a second incident involved “students locking arms” and a third in which a student “had been blocked by other students,” but declined to discuss details.

DeWitt resident Corina Gonzalez told the State Journal that Maliah Gonzalez, her seventh-grade daughter, was targeted in the third incident.

“She attempted to get to her locker, and there were some boys blocking the locker,” she said. “And they were chanting things such as ‘Donald Trump for president; let’s build the wall; let’s make America great again; you need to go back to Mexico.'”

Corina Gonzalez said her daughter, who is Mexican-American, was with two or three Latino friends when the incident happened.

Those students are friends with the daughter of someone I know. DeWitt is 94% white. Every single kid involved in every one of these incidents should be suspended and be required to take racial sensitivity training. 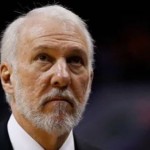 November 13, 2016 Another NBA Coach Unloads About Trump's Election
Recent Comments
0 | Leave a Comment
Browse Our Archives
get the latest from
Nonreligious
Sign up for our newsletter
POPULAR AT PATHEOS Nonreligious
1