The Sneaky, Deadly Lies of the Duggar’s “Christianity” 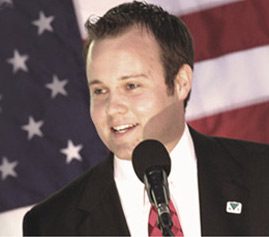 What are we to learn – and teach – from the Duggar family? Josh Duggar admits to repeatedly molesting, assaulting and sexually abusing his younger sisters, and another unnamed minor. The parents, Josh’s wife, and others – including people like Mike Huckabee – call it a “mistake.”

Yet these are the same people who, Bible in hand, condemn gay Christians as “a disgusting abomination and a threat to teens.”

How does this possibly make sense?

For box-christians, everything must fit neatly in a box, and that box allows for “mistakes” within that system, mistakes that don’t threaten that system. The same is true with pastors and priests caught with their pants down, who are buttoned up and moved on, with no real concern for the children involved. The overriding interest is maintenance of the male-dominated, rules-based, church system.

Gays don’t fit that system. Non-acceptance of gays is not about God, or Jesus, or the Bible, by the way, not in the least, and don’t let anyone tell you it is. It is about the current system of power. And that power system must stand – no matter the cost.

Parents Jim Bob and Michelle said in a statement that God had worked this situation for good. I wonder if the abused girls feel the same way?

Of course, when the girls are young and caught up in that system, they will feel whatever they are told to feel, sublimating their authentic feelings because there is no place to bring them out – but if they are able to unpack their wounds outside of that fearful system, I wonder what they would say?

I also wonder if the girls are getting real counseling for real healing, or if this is being handled “in-house” as those invested in maintaining this conservative church system usually do.

Time and again this happens, as above with the pastors and priests. “Counseling” that quiets everything down and keeps the structure in place, that is the only kind allowed. The focus is maintaining the image of morality. That has been confirmed with the media coverage that has that same focus and talks primarily about Josh, his family and his ability to continue to do his work “on behalf of the family.”

Real counseling pulls the rug out from under the system and upsets the whole patriarchal order – and that is just not allowed.

However much they may say they care about the girls, they don’t care enough to pull on the threads that would unravel the dominant system.

Do “box-christian counselors” tell LGBTQ people that they are wrong and must change, because they believe it’s a sin? Pshaw! No: it’s because acceptance disturbs the system. Do they really provide a safe place for the girls to really name names and disrupt structures so that the truth will out? No. It’s way too threatening.

Jim Bob and Michelle also said that this has “caused them to seek God like never before.” Perhaps they need to keep looking. God is not the rules-based system they live in and try to maintain.

They said in the parents’ statement, “we tried to teach him [Josh] right from wrong.” They taught right and wrong according to their system, but with no reality beyond that. Those who like to throw the Bible around might want to know that teaching right and wrong instead of teaching Jesus is eating off the tree of knowledge, which Genesis 2:17 declares forbidden.

They claim to follow Jesus but they have no idea what he taught or the way he lived. Their “Christianity” – the religious, non-affirming, behavior-focused Christianity – is immeasurably far from the truth, life and heart of Jesus.

To teach our children right and wrong in that system only sublimates them but does not do anything with the real heart (Colossians 2:20-23). It is unconditional love, it is the power of Jesus that grasps the heart.

I heard someone say, “This kind of doctrine squeezes the humanity out of people until they snap.”

Josh’s parents are obsessed with behavior, with i-dotting and t-crossing instead of loving as Christ loves, with right and wrong according to our own understanding – with doing instead of being.

And the natural consequences of that belief are being revealed. I am afraid this is just the beginning of the unraveling for the Duggar family… though those who precede them in these kinds of catastrophes usually zip it up and move forward with virtually no real soul-searching to find the systemic problem at the core.

“Now is the time for TLC to double down and have the courage to present America, at last, with a truly unscripted show about a family enduring a crisis largely of its own making. Life is not what it quite seems at the Duggar compound – but… who would honestly believe that you can raise 19 human beings to all think and act according to their parents’ beliefs?”

At what point does the Duggar father presiding over this household actually surrender his kids to the God in whom he professes ultimate faith? Well, that’s not really part of the program.

People look at the outward appearance – God looks at the heart (1 Samuel 16:7).

When we love God and love others, the rest just works itself out in a beautiful way. 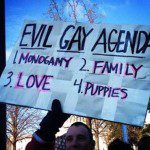 May 15, 2015
Are You Leading People Astray by Supporting Gays?
Next Post

May 25, 2015 "I am the mother of a gay son and I've taken enough from you good people."
Recent Comments
0 | Leave a Comment
Browse Our Archives
Follow Us!