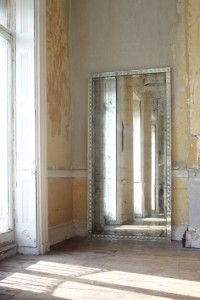 I have circled around this story several times, trying to write my way into it.

I begin with an inciting event:

An eighty-nine year-old man lies unconscious, unresponsive in intensive care in a California hospital. His name is Vince and he was hit by a car in the town he’s lived in near forty years, the same town that was my home for twenty-five.

I am now nine hundred miles north, but in my mind I see the pharmacy he left, the crosswalk, his wife waiting in their minivan parked outside the beauty parlor. I picture her stumbling from the car with her uneven gait, pedestrians rushing to her side, to his aide, sprinting to the fire department down the block for help.

I read the news on Facebook first, that “an elderly gentleman” had been hit, and stopped at this description of him. Though he’d been retired from his work as missionary to Pakistan the twenty-five years I’d known him, he was far from gentle.

From there my words add up to a litany of how hard this man—who died days later from his injuries—was to love, a long complaint about our relationship.

It doesn’t work. My editor tells me: “Basically you still believe he was deeply misguided about most everything and that you have the correct ideas, so the piece just becomes a ‘He was wrong and overbearing and fearful but we’re still all one in Christ.’”

This wasn’t how Vince was supposed to die—he’d driven the Al-Can Highway in a motorhome one summer in his seventies. He drove all over the U.S. visiting family and fellow former missionaries. And all those years in Pakistan, so many dangers could’ve claimed him. Now, in his old age it wasn’t cancer or Alzheimer’s, or anything predictable.

I didn’t care for him much, but he deserved a better death than this: A sterile hospital room and a triage tree and a flowchart of incremental decisions narrowing down to no more choices. It should’ve been The Threshold Choir at his bedside singing him to the next world as his consciousness ebbed with his pulse. He should’ve been at home, surrounded by sons and daughters and two dozen grandchildren speaking low while the hospice nurse administered morphine and everyone smiling, sweet and sad, feeling Jesus there, wings beating slow behind his back. All of them waiting for the moment they surrender their husband, father, grandfather, into those outstretched hands, the ones bearing nail scars, the ones Vince had wanted to hold fast to forever.

I have imagined a better death, but my editor’s words ring in my ears: “There’s ultimately no real conflict here, no tension.”

I have lost a number of elderly parishioners and friends for whom I did not have ambivalent feelings. For them I’ve been content simply to preside at their memorial services in my role as pastor.

Why then, do I keep coming back to Vince?

I have read and heard time and again that the memoirist is supposed to go deep and then deeper, writing into new layers of understanding, and I struggle, falling into fiction’s “show, don’t tell” dictum, hoping that somehow meaning has been embedded and will emerge.

Off the page, it’s usually when describing a situation to my prayer partner and listening to her response that my own understanding is triggered, that I begin to grasp the reason an event has hooked me.

My editor said of my first draft: “Yes, you are paying tribute to someone you disagreed with, but it doesn’t seem to cost you very much.”

He was wrong. It didn’t cost me anything.

As a person of faith, and his pastor for a time, I wanted to believe Vince’s life illuminated mine; that Christ worked in us—through Holy Communion if nothing else—but I was afraid to look closely if it meant exposing myself.

Journaling, a question emerges: Is it possible the traits I disliked in Vince are those I dislike in myself?

Vince insisted on being heard, and he interrupted worship services to expound his views. He didn’t stop when asked, even when no one agreed, perhaps believing that by stating his opinion often enough, or expressing his fears strongly and frequently enough, that others would come to his point of view, or change circumstances so that they no longer made him uncomfortable.

He wanted the world to change to fit his views.

I wanted him to change.

I wanted him to stop interrupting me, stop disagreeing with me, even to stop praising me, because the compliments always came with suggestions and reading material designed to fit me into his mold.

I see now how like him I am: stubborn in my convictions that I’m right and those who disagree with me are wrong, threatened by change unless it is change I initiate, motivated by fear, demanding that others validate my views.

In the twenty-five years I knew Vince I never saw him as a mirror. Instead of seeing myself reflected, I tried to deflect both him and self-knowledge. I wasn’t ready to give up those aspects of my personality until my life didn’t work: the plans I made failed and the people I insisted on managing rebelled.

It took my leaving ministry, my husband losing his job, the two of us moving far from friends and family for change to come.

But a car struck Vince and that was the end of the man I knew. The violence of the act and the days he lingered unnerved me. I wanted him to fight, wanted his tenacity to win when it mattered.

But maybe he too had changed. Or maybe death was one thing he never feared, knowing he’d find heaven and Jesus there.

Cathy Warner is the author of Burnt Offerings (eLectio 2014). She serves as “Good Letters” Literary Editor, and earned an MFA from Seattle Pacific University. Cathy and her husband renovate homes hiring veterans through their business Yellow Ribbon Homes, and she leads writing workshops in West Puget Sound. Her website is cathywarner.com.

May 15, 2014
That Woman is Gone: Discovering Postpartum Depression
Next Post

May 19, 2014 Matteo’s Shoes: An Observation from the Way of Saint James
Recent Comments
0 | Leave a Comment
"Ah, so now the imaginary War on Xmas is transmogrified into The War on Santa, ..."
David Miller How to Win the War on ..."
""Aural" refers to hearing, "visual" to seeing"
merphd The Gutenberg Imagination
""It doesn’t matter when you start the Sinatra Christmas playlist or put up your tree. ..."
C_Alan_Nault How to Win the War on ..."
"Yup."
Max Marvel Finding My Inner Calamity Jane
Browse Our Archives
Related posts from Good Letters