Where Is the Light in Our Darkness? 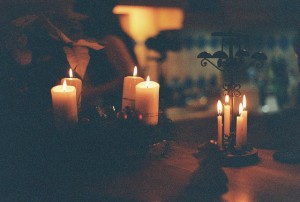 For most kids I knew, Christmas was a time of anticipation. Even if you hadn’t yet figured out what was happening, you knew it was something. The music changed. Stores overflowed. Things began to sparkle.

Even once you knew what was happening, there remained a sense of delightful oddness. I think it was the lights, which cast everything in bright color or strange shadow. Or perhaps the eyes and hearts of people, likewise lit or darkened.

Christmas brings out the best and worst in mankind. In we small children, it brought forth a good and childlike thing, which is the belief that the world is covered over with magic, and all you need, in order to see it, is a different kind of light.

The world soon obscures that childlike vision. Many of us learned to see Christmas as a time of plunder. For some, it became a season of annoyance, even bitterness. For nearly all it became a gaudy carousel operated by madmen, and we all grabbing hold and clinging, because how can you let go? How can you disappoint those who await presents? How can you not hang the decorations you’ve accumulated in the attic?

How can you avoid the parties, the gatherings of fractured and factious family, the recitals and plays, the renderings of Tchaikovsky or Handel (because this year our kids are going to get some culture if it kills us!), the homeless-shelter outing (see, kids, how good you’ve got it!), the never ending trips to the grocery store?

I’ve had small victories against the carousel: No more Christmas card mass-mailings. No more house-to-house visitations on Christmas Day. I even choked down the sense of obligation to retaliate when someone launched an unexpected gift in my direction. All of it an effort, I suppose, not to achieve a higher spiritual plane so much as to avoid grouchiness.

Because we’re supposed to be happy at Christmas, dammit—that’s the lesson in every Christmas movie. The worst Christmas sin you can commit is to bah-humbug your way through it. Smile and be thankful, for Christ’s sake.

This is one of the gripes my kids have about our Orthodox Church. “I’d like it better,” my ten year-old offered as a for-instance, “if the music was happier.” I understand. The music is solemn, and feels more so in the days leading up to Christmas, because the rest of the world is rocking around the Christmas tree while we embrace a forty-day Nativity Fast, which brings with it joyous anticipation, yes, but also remembrance that the Child comes to an execution.

No wonder my kids chafe, raised as they were for years on the notion that Christmas is the most wonderful time of the year, a happy season beginning right after Thanksgiving and ending the instant we all trudge back to school or work, surveying on our calendars that long stretch of winter gray standing between us and the next vacation.

It’s supposed to be a weeks-long celebration, and here’s dad trying to refrain from meat and Christmas cookies, dragging them to church, and not once do we sing “Hark! The Herald Angels Sing” or “Joy to the World,” but instead go on about longsuffering Christ and Mary’s womb and the evil fruit that brought us to our sorry state.

I don’t suppose that feels much like Christmas, to them. And how can it, when the rest of the world enjoins us to eat, drink, and be merry?

Except it isn’t the rest of the world; it’s our isolated sliver of territory. Elsewhere, it’s hell to be a child.

Scores of little ones were butchered in Pakistan weeks ago. Kidnapped girls as young as eight are being raped in Iraq and Nigeria as you read this. In countries throughout Asia, children who will never have so much as one stocking’s worth of toys labor right now, for pennies, to make our next year’s gifts.

Peace on earth? Depends on your zip code.

To enjoy Christmas in the good old American fashion, then, you have to wipe these things from your mind. Forget, as well, ravages in this country: suicide the second-leading cause of death among teens and twenty-somethings; the annual extermination of a million infants whose eyelashes and beating hearts belie the national delusion that they are merely a kind of tumor.

Next week many Christians will commemorate the slaughter of the Holy Innocents, but the world slaughters innocents daily, and who wants to think about that at Christmas?

It’s rare between us because it remains rare within us. We’ve made a hell of earth, but God will not leave us to it, no matter how much we resent him for the intrusion. And so we sing: “Light has shone on those in darkness.”

This is the strange light I knew as a child, that perhaps my children know as well. It’s the light that changes everything, illuminating what is beautiful and casting into deeper shadow that which is not, ending our enslavement to death, to hopelessness. There is hope now, but afflictions as well, and as for why mine are so much lighter than others I cannot say, except perhaps that my weaker faith can endure no more.

“Light has shown on those in darkness.” That is our hymn about this imperishable light that has come and is coming, to make all things new, though for the worst-off it does not come quickly enough, and perhaps even tarries, for the likes of you and me, that we have another hour or day or year to turn away from our baubles to that strange star, come into the world to save the dying and sinners, which includes us, perhaps especially us, and certainly me.

Picture by Marketa, used under a Creative Commons license.