Jesus and Legos in the Deep, Part 1 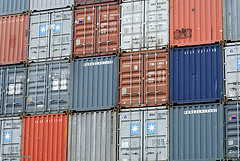 I read about a shipping container holding five million Lego pieces that fell into the sea off Cornwall, England. An oceanographer requested samples of what was in the container, and tossed them into his bathtub. Based on his impromptu test and the ship’s manifest, he estimates about three million of the lost pieces can float. Only about 100,000, however, have washed ashore.

Other people have taken interest; there’s even a Facebook page devoted to beachcombers’ Lego finds. Nearly every piece traceable to this container has been recovered on Cornwall’s beaches, perhaps because the Lego search has become a pastime there. The relatively small quantity recovered leads the oceanographer to conclude that the container remains sealed, but for a hole through which small batches sometimes escape. The others are still down there somewhere, he says, “waiting for the doors to open.”

A favored icon among us Eastern Orthodox, especially in these weeks after Pascha (Easter), is of Christ’s resurrection: He is surrounded by holy light, illuminating a chasm in earth and rock, hell sundered beneath his feet, saints left and right freed from death by his work. Christ with hands outstretched, pulling Adam and Eve from their tombs, and they reaching, reaching, because all they can do—all that remains to be done by any of us—is strain Godward.

“Christ is risen from the dead,” we sing, “trampling down death by death, and upon those in the tombs bestowing life.”

Over the centuries, this resurrection faith has been the defense offered to those—be they pagans, rationalists, theologians, or that hybrid of the three whose natural habitat is the school of divinity—who accuse us of idol worship and necromancy. We reverence icons and ask saints to pray for us because our faith—once shared by all of Christendom—is that they aren’t dead.

We pray for those who have fallen asleep in the Lord, meanwhile, because while the notion of time as a linear phenomenon is a Western construct that binds our thinking, it does not bind God. There is man’s calendar and there is God’s time, which is why, as philosopher Charles Taylor explains, at three in the afternoon on Good Friday we are closer to that fate-changing moment on Golgotha than we are to supper time.

These are mysteries and foolishness to the modern intellectual, which is all well and good because they are not meant for him. Neither is the story of the Harrowing of Hell, which was illogical first and foremost to the devil. The ledger was laden, and the wages of sin are death. This is the law, and the devil had rightfully claimed every life, but Christ the Just and Justifier brought salvation to the tombs. There is no logic in death defeating death, nor in God who trod hell for the sakes of we who deserve it.

This was the point of a recent Salon article alleging that Western Christians largely ignore Christ’s journey to hell. A number of pundits shot back with creedal excerpts to the contrary, but Dorothy Sayers offered a pointed rejoinder seventy-five years ago in “The Dogma is the Drama,” with a speculative quiz of the average Christian’s doctrinal knowledge:

Q: What is the doctrine of the Trinity?

Q: What is meant by the Atonement?

A: God wanted to damn everybody, but his vindictive sadism was sated by the crucifixion of his own Son, who was quite innocent, and therefore a particularly attractive victim. He now only damns people who don’t follow Christ or who never heard of him.

Dogmatic knowledge, in the dregs of the Christian West, has only decreased since the time of the woman who wrote Christian Letters to a Post-Christian World. Its decline proceeds apace with literary impoverishment; forgotten with the Nicene Creed is the sundered entrance described by Dante’s Virgil, that “less secret gate, which is, and will forever be, unlocked.”

So yes, Christ’s descent into hell is stated in the Christian creeds, but how many churches still read them, and how many professing Christians really ponder what they mean? This subversive point, had it been made by some popular puritanical scold rather than a presumably heathenish Salon dandy, might have elicited head-nodding from the very people it scandalized.

The story of the lost is a story of blindness, and of willful obtuseness, too. “When the glorious disciples,” we sing during Holy Friday Matins, “were enlightened at the washing of their feet before the supper, then the impious Judas was darkened.”

Darkened, which is how stubborn Pharaoh is described in the book of Exodus. The truth is offered, and willful men turn away, as we have done from the beginning, becoming too clever for our own good, too quick to assent when the serpent whispers: “Did God really say…?”

Photo above credited to Steve Gibson and used under a Creative Commons license.

April 29, 2015
Sexist Assumptions and the Difficult, Dirty Work of Grace
Next Post

May 1, 2015 Jesus and Legos in the Deep, Part 2
Recent Comments
0 | Leave a Comment
""It doesn’t matter when you start the Sinatra Christmas playlist or put up your tree. ..."
C_Alan_Nault How to Win the War on ..."
"Yup."
Max Marvel Finding My Inner Calamity Jane
"I an confused by the use of "aural" here: "In The Gutenberg Galaxy, he explained ..."
William G II The Gutenberg Imagination
"My friend is looking for a Pepper Smith he served in the army with, was ..."
Christine Budnack The Love Song of Pepper Smith
Browse Our Archives
get the latest from
Catholic
Sign up for our newsletter
POPULAR AT PATHEOS Catholic
1