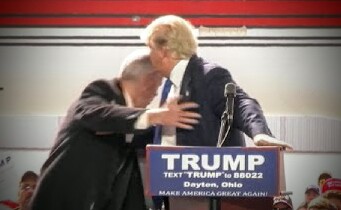 I shouldn’t be surprised, but I can’t help it. No, I’m not shocked that there might be someone who wants desperately to attack Donald Trump. I am taken aback, however, by the Secret Service. Wait, taken aback isn’t right. Watch this.

I’m moved. Did you see what those guys did? When a threat to their charge was perceived, they didn’t hesitate even a second. They used their bodies to shield Donald Trump. Control had been momentarily lost, a likely attacker had attempted to move on Trump, which meant that there might be others, and that they might have guns. And these men, without even a hint of consideration, formed a wall around Trump, each effectively saying, “Shoot me instead.”

Put aside for a moment that it’s Trump. Which I know is hard. Just the fact that a person would sign up for a job in which such a binary choice could very likely have to be made, to understand that if the situation arose, there would be no question that you would die before the person you protect.

When it’s the President of the United States they’re protecting, there’s a kind of mystical honor bound up in that sacrifice, you can kind of wrap your brain around it. Even if you don’t like a given president, I think we can all sort of grasp how the fate of more than just a single human being is wrapped up in a president’s life, that the workings of our society demand that this person be defended at all costs, and that in giving one’s life when a president is threatened, you are giving your life not for an individual, but for a country, for an idea. I get that.

But a presidential candidate is another thing. And a presidential candidate that is Donald Trump is another thing times a billion. I don’t know if any of those guys like Trump, or if they hate him, or if they don’t even think about it. But it doesn’t matter. When an immediate threat arose, they, as a unit, in almost perfect synchrony, used their bodies as a shield to defend his life.

Words like “brave” and “hero” come to mind, but they don’t quite describe the gut-level tug that this kind of willingness to sacrifice oneself induces in me. It’s similar to how I feel about stories of 9/11 first responders, those who ran in when everyone else ran out. “It doesn’t matter, I’ll die so this other person can live.” It moves me.

I mean, fuck Donald Trump. That swaggering asshole is a waste of elementary particles.

But my deepest respect and awe to those Secret Service guys, and to anyone who jumps in front of the bullet or runs into the burning building so someone else can live.

March 14, 2016 Presidential Primaries Might Be a Terrible Idea
Recent Comments
0 | Leave a Comment
"I know this is an old post....but I absolutely HATE my mac....much of it has ..."
annab Photo Management on the Mac Just ..."
"You sound like my son. I've loaned him a bunch of comics from the '60's ..."
Bob Jase Stuck Outside of the Comic Books ..."
"I always thought that Wells, otherwise a smart cookie, missed on the whole microbe thing ..."
Diamond Mike The Martians’ Singularity: Thoughts on “The ..."
"I feel your pain. I have always been an avid reader but a late entrant ..."
Mark in Ohio Stuck Outside of the Comic Books ..."
Browse Our Archives
get the latest from
Nonreligious
Sign up for our newsletter
POPULAR AT PATHEOS Nonreligious
1

Russell Moore: Not Really a Hero
Roll to Disbelieve
Related posts from iMortal