To Change The Church: Interview With Ross Douthat

An interview with Ross Douthat

Dave blogs at www.twocities.org and some of his videos can be accessed at www.mooreengaging.com.

Ross Douthat writes for The New York Times. He is a Roman Catholic of a decidedly conservative stripe. His latest book is one part history, one part cultural critique, and one part cri de coeur. Douthat’s cry of the heart does not get lost in mere sentimentality. He knows his history and is ready to argue for keeping the deposit of faith passed down from the time of the apostles.

Since I am writing from a “Protestant” vantage point, allow me to offer a definition that is not widely appreciated either by those within the Protestant orbit or those outside of it. It comes from the patristic scholar, D.H. Williams in his Retrieving the Tradition and Renewing Evangelicalism:

The term “Protestant” is commonly used with a negative connotation.  Everyone knows that Protestants are those who “protest” and dissent from Roman Catholicism.  While historic Protestantism did indeed register a series of objections to Roman Catholic dogma and practice, such a definition is nonetheless unfortunate and even imbalanced for the reason that the Reformation was at heart an affirmation, a vigorous protestation of positive principles.  A Protestant was, as the primary meaning of the Latin verb protestare indicates, one who seeks “to bear witness,” or “to declare openly.”  Historically, Protestants are those who have sought to affirm certain tenets of their faith which bear witness to the apostolic message.

My own Protestant tradition has loads of problems. Douthat’s To Change the Church makes it crystal clear that there is no pristine Christian tradition, even though Douthat’s purpose was not to highlight that reality. All Christians are embedded in communities of faith with doctrinal differences that cause much rancor and heartache.

Douthat: I think the language of denominations implies not just theological diversity but explicit institutional forms for that diversity, and I don’t think Catholicism is quite there yet. Instead, I’d put it this way: Despite its official unity the Catholic Church has increasingly divergent theological traditions, and divergent conceptions of the church itself, jostling for space and competing for power within a single institutional structure. Indeed, what’s striking about the decades since the Second Vatican Council is the way that the church has ended up containing theological differences that in a Protestant, denominational context would often (and have often, for Anglicans and Presbyterians and others) lead to formal institutional splits. The question in the age of Francis is whether he’s figured out a particularly ingenious way to make room for more of those internal disagreements without splitting the church – basically by simultaneously drawing distinction between the “doctrinal” and the “pastoral” on the most controversial moral questions and trying to decentralize a certain amount of doctrine to national bishops’ conferences – or whether he’s accelerating a process that will eventually make the divisions so significant that Catholicism’s institutional center will not hold.

Moore: My guess is that many Roman Catholic, whether self-identified as so-called “progressives” or “conservatives” will be angered by parts of your book.  In my estimation, that alone makes it worth reading! What kind of feedback are you receiving from those who identify with the Roman Catholic Church?

Douthat: It’s mixed, as you might expect! I would say the response from more theologically-liberal Catholics has been divided: There have been a few angry reviews that dispute my argument from start to finish, and then a larger number of more gracious reviews that basically say, “Douthat is a sincere Catholic and his fears are somewhat reasonable, but mostly he exaggerates the dangers of schism and ignores the fact that the church has changed many times in the past.” Then among conservatives, to generalize a bit, I’d say that younger Catholics, who tend to be a little less invested than their elders in the idea that John Paul II settled all the important debates within the church, have been more sympathetic to the book’s argument – which as you say includes a critique of conservative Catholicism before Francis. While Catholic writers somewhat my senior seem more uncertain what to think, both about my own argument and the larger question of what’s going on under this pope; they often agree with me about the theological issues but aren’t sure about my estimation of the severity of the crisis.

The book hasn’t sold enough copies, I’m afraid, to be able to give you a sense of how grassroots Catholics are receiving its argument. And I have not, alas, received a phone call from the pope himself. But it’s early yet.

Moore: You offer clear, compelling, and courageous reflections on the legacies of Pope John Paul II and Pope Benedict XVI.  I would love to know what other “conservative” Roman Catholics like George Weigel, Robert Royal, Bishop Robert Barron, and Archbishop Charles Chaput think about what you have written in To Change the Church.

Douthat: As would I! But I don’t expect bishops to weigh in too directly on a book that criticizes the Holy Father. And I think George Weigel, at least, favors a slightly more behind-the-scenes approach to addressing a pope whose course he thinks needs correction.

Moore: You present a convincing case that the best change will not come from centralized Roman power elites, but from the rank and file of believers.  What kinds of positive things are happening that we don’t receive in our media coverage?

Douthat: The case with which I’m most familiar, as a Catholic living in Connecticut and attending (at the moment) a Dominican-run parish, is the remarkable revitalization of the Dominican Order in its eastern chapter in the U.S.A. – the point where they seem to have more vocations than they have potential assignments for their priests. In the end, I tend to see that kind of vocational renewal as an essential element of any Catholic revitalization – in the sense that yes, lay activity and activism are important, but the strength or weakness of the priesthood and religious life is the clearest sign of where a given Catholic culture is going.

Moore: Trying to understand the real Pope Francis seems to be a formidable task.  He does not fit easily into liberal or conservative categories. Is he more of a pragmatist?  Perhaps.  Is he more of an activist than intellectual?  Undoubtedly.  Is he desirous of cleaning up corruption in places like the Roman Curia?  Most likely. Will he be able to clean up the corruption?  I’m doubtful. Is he going to make the church more sensitive to the needs of common folk?  We will have to stay tuned for that one. You do not paper over these complexities so how would you categorize the theological commitments of Pope Francis?

Douthat: I would describe the pope as a definite liberalizer without necessarily being a liberal, full stop. He plainly believes, with many theological liberals, that the church became or remained too rigid and doctrinally-fussy under John Paul II and Benedict, and that there are various areas – beginning with communion for the divorced and remarried and continuing into other related arenas – where a kind of truce with modern cultural mores is possible and desirable as a way for the church to renew itself and evangelize anew. The question is how far he’s interested in going, how far he’s willing to run with liberal premises; you can see a number of cases, including debates over end-of-life issues in Europe, where some of his liberal appointees have pushed further toward cultural accommodation than the pope himself, and he has either reined them in or simply disagreed publicly (as in the interesting split between Francis and the English bishops over the Alfie Evans tragedy). I would say he has a definite agenda but not a comprehensive one — but he’s ended up with allies and appointees who do have a more comprehensively liberal vision, and who are using their alignment with Francis to push as far as they can.

Moore: The chapter on marriage well illustrates your concerns over the less than conservative moves of the present Pope and of those he is choosing for key leadership positions.  As a Protestant, it is fascinating to juxtapose the Roman Catholic position with the various options held even among Protestants who intentionally seek to be tethered to the Bible.  Even going back to the Puritans we find more allowance for divorce and remarriage than the official Roman Catholic position. I’m curious why you did not have more engagement with Scripture in that chapter.

Douthat: Well, the chapter opens with some scriptural engagement, and then it links back later to some more general scriptural interpretation in my next-to-last chapter on the larger theological stakes for the church. Your reaction is interesting, because this is a case where my critics sometimes accuse me of being almost fundamentalist in my focus on Jesus’s words in scripture – of being too Protestant or biblically focused, in other words. But my sense has always been that on some of the key issues in New Testament interpretation – including Jesus’s words on the Eucharist as well as divorce and remarriage – Catholicism has a strong case to be more literal in its fidelity to hard or strange-seeming teachings than, as you say, even the Puritans. And I’ve always thought this is part of what makes Catholic truth claims compelling – that the church has stayed truer to scripture in these cases than its supposedly sola scriptura challengers and critics.

Moore: The idea that the Roman Catholic Church has great unity in doctrine is the official tagline, but the feet on the ground reality is more diverse, even chaotic at times.  Different factions vie for influence and do so in some very unseemly ways. You are to be commended for your candor and courage in making this better known. What are a few things you hope your readers get from To Change the Church?

Douthat: I suppose there are three levels in what I’m trying to do. First, tell the story of the Francis era well enough to make it come alive as the great, gripping narrative that it is – a fascinating story about a charismatic leader trying to change an officially unchanging church, with all the theological complexity and human drama that entails. Second, persuade the reader of this story’s importance – that not only is the Francis era fascinating in its own right, but that in its drama the trajectory and ultimate fate of the world’s largest Christian body may be decided, and with it the trajectory of all traditional religion in the modern world. Finally, persuade the reader that I’m right not only about the stakes, but that I’m right about the merits – that the liberalization Francis is pursuing really does risk breaking faith with something essential to Catholic Christianity, to the words of Jesus Christ.

Those are the goals; readers can judge the execution for themselves.

May 21, 2018
Rich Mouw, Israel, The Palestinians, The Eternal Capital
Next Post 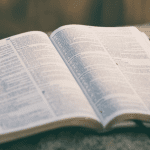 May 22, 2018 The Word of God is Not a Book (RJS)
Recent Comments
1 Comment | Leave a Comment
Browse Our Archives
Related posts from Jesus Creed