The harrowing of hell and the victory of Christ

The harrowing of hell and the victory of Christ March 30, 2013 Joel J. Miller

We read in the Apostle’s Creed that Jesus “descended into hell.” Some Christians today are unsure about this idea, but it is an ancient and venerable belief of the church. We commemorate this descent on Holy Saturday, the somber sabbath following Christ’s great labor on the cross.

While his body rested in Joseph’s crypt, the Lord entered hades. In this event we call the harrowing of hell, Christ entered not as victim, but as victor. He came to raze the place. There in the realm of the dead, Christ blasted through Satan’s gates like a battering ram.

Said Cyril of Alexandria, “When the gatekeepers of hell saw him, they fled; the bronze gates were broken open, and the iron chains were undone” (Ancient Commentary on Scripture 11.107).

As fourth-century Spanish poet Prudentius painted the scene, “The door [of hell] is forced and yields before Him; the bolts are torn away; down falls the pivot broken; that gate so ready to receive the inrush, so unyielding in face of those that would return, is unbarred and gives back the dead. . .” (The Daily Round 9).

Proclamation of the gospel

The scriptural foundation for this view rests on a handful of passages. In the language of Ephesians 4, for instance, Christ “descended into the lower parts of the earth” and “led captivity captive.” In the language of the gospel, he came to bind the strong man — the devil — and loot his house, the treasure of Satan being the souls of men. To these passages add 1 Peter 3.19, in which the crucified Christ “proclaimed to the spirits in prison,” that is, in hades.

Some translations render that word “preached,” but the idea is one of announcement, a declaration of victory, which is exactly how fourth-century theologian and hymnographer Ephraim the Syrian saw it:

[T]he voice of our Lord sounded into Hell, and He cried aloud and burst the graves one by one. Tremblings took hold on Death; Hell that never of old had been lighted up, into it there flashed splendors, from the Watchers [angels] who entered in and brought out the dead to meet Him, who was dead and gives life to all. (Nisibene Hymns 36.11)

Christ “shouted with authority to the suffering souls, according to the words of the new covenant,” said Cyril, “so that he might save all those who would believe in him” (ACS 11.107).

Melito of Sardis, writing in the late second century, presented this as a bold proclamation as well:

“It is I,” says Christ,
“I am he who destroys death,
and triumphs over the enemy,
and crushes Hades,
and binds the strong man,
and bears humanity off to the heavenly heights.”
(On Pascha 102)

A classic iconographic depiction of the resurrection shows Christ ascending from the grave, Hades’ doors broken and lying in a crosswise pattern as the Lord takes Adam and Eve by the hand — takes all of fallen humanity by the hand — and frees them from their age-old imprisonment to the devil. Directly referencing the gospel imagery, the icon often depicts Satan as an old man, bound beneath the feet of the risen Christ.

Not only was Satan defeated, but so was death itself. In Nisibene Hymns, Ephraim personified death and put these words on his lips:

The harrowing of hell represents the victory of Christ over all his enemies and the path of salvation opened to all who would believe. While some contemporary theology has no room or understanding of this doctrine, Christians are invited to see it as a vision of the conquering Savior, whose triumph is so complete, so thorough, so exhaustive that he descends to hell and empties it of every soul who responds to his call. 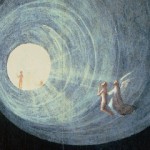 March 29, 2013
Heaven is more than an endpoint. It's a possibility right now
Next Post

April 1, 2013 Watch Alister McGrath discuss new C.S. Lewis biography
Recent Comments
122 Comments | Leave a Comment
"Thank you, I am a Mormon and my love for Jesus Christ is only surpassed ..."
Tina Beal Why Mormons aren’t Christians
"Two kings were about to wage war against King Ahaz. Isaiah comes along and gives ..."
Prizm Is the virgin birth really predicted ..."
"Praying three times a day is the Jewish prayer schedule. Blessing the Lord seven times ..."
Jennifer Lee Why pray the hours?
"So do you have any evidence that the Greek version is more authentic to the ..."
geoffrobinson You’re reading the wrong Book of ..."
Browse Our Archives
get the latest from
Evangelical
Sign up for our newsletter
POPULAR AT PATHEOS Evangelical
1

Does the Bible teach that women...
Determinetruth
Related posts from Joel J. Miller