Not that kind of Christian 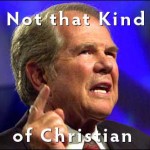 In case you weren’t sure, I’m a Christian.  But wait, I’m not that kind of Christian. I’ve felt it and said it dozens of times. Have you? You know, when someone finds out you are a Christian and you feel like you must clarify, or worse, apologize? We see the pictures on Facebook. We read the stories on HuffPost. We watch the videos on YouTube. We hear the stories of people hurt deeply. We read the posts from friends and family right on our own timelines and many of us carry the wounds deep inside of us. We are bombarded with the pulsating sights and sounds of “Christians” who are the very reason you don’t want anything to do with Christians. Millions have been hurt or totally turned off by Christians such as Pat Robertson, Tony Perkins, Mark Driscoll, Creflo Dollar, Debi Pearl … local pastors, aunts, uncles, moms and dads. Unfortunately I don’t have to belabor this point too long – these stories permeate our culture.

This is hard for me, but I guess before I go on I need to claim a couple words that are hard for me.

One – judgmental – yes, I guess I am. I am afraid there are those out there who claim the name Christian who I would, though not my right, I would classify as, well less than stellar examples of living gospel life (maybe I would even, in very special cases go so far as to say they are in fact not Christian at all). Who? Well, those who use the bible as a weapon, those to choose ignorance and fear over holy questions and loving compassion, those who actively work to exclude people from God’s table, those who put Mammon before God and those who worship the flag right along side the cross.

Two – Evangelist (I know, right?) I just feel it is high time we who walk this path of radical hospitaltiy tell the story and claim the name lest we leave it for all time to another sect.

Sure, we know the ways folks who claim that name have really f’d up but there is so much more to our story. There have been and still are amazingly faithful people out there who are loving, justice seeking, hungry feeding, chasm closing Christians whose stories just don’t seem to make the news. When we fail to tell the story we are allowing others to define Christianity and thus continue to drive the “rise of the nones” (Google the phrase, way too many links from which to choose).

So, in case you are so called to reclaim the story, here are just a few names of people you can lift up (or paste in) the next time you read a comment claiming that all Christians have been and still are “backward-ass haters.” I’m not saying the folks on this list are perfect, nor is this list ANYWHERE CLOSE to comprehensive (nor in any order than stream of randomness) but when I asked friends on Facebook these are some of the names shared as examples of Christians who’ve done it quite differently than some that have become the poster children for western Christianity.

When I asked friends on FB to name the beacons of light they lifted up the names above as well as:

Kara: “Amy Laura Hall and Tim Tyson”
Leah: “Anne Lamott as a writer, but as a real person who I’ve have the pleasure to know, John Merchant. When I think of everything I hope to see in “a man of the cloth”, I think of John.”

Bruce: “I would lift up Revs Anna Hall, Michael Piazza, and Cameron Trimble.”

Cheryl: “Walter Bruegemann wouldn’t teach in his own church but could be found Sunday after Sunday washing coffee cups during the fellowship hour.”

Peter:  “Ronald Thaxton and Nancy Thaxton were some amazing people who were transformative in my life 20 years ago – they started the process of teasing out answers to questions – many planted by a close friend who did not get my “church thing” when I decided to follow Jesus some several years before that. Jay Bakker, Adele Sakler, Kathy Silveira Escobar, Kathy Verbiest Baldock, Pastor Nar, Pat Green, Rebecca Bec Cranford-Smith”

One friend said: “Gandhi was a way better Christian than most Christians”

And here are just three cool videos ( Lord knows there are a gazillion more) for your viewing and sharing pleasure.

I invite you, IMPLORE you, to share names, stories and links in the comments below. The more stories you can share of love and service from local settings the better!  Please help make this post a resource that Christians can pull from when ever they feel the need to say “I’m not that kind of Christian, but I just might be this kind of Christian.” 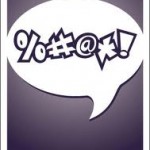 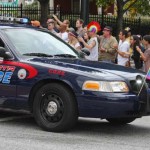 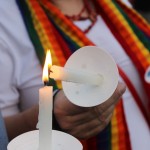 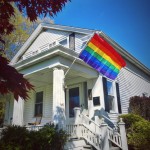 Progressive Christian
That Holy Spirit, She so Cray-Cray
Kimberly Knight 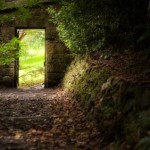 303 responses to “Not that kind of Christian”