ACE and the suppression of women: Lana’s story

Patheos Explore the world's faith through different perspectives on religion and spirituality! Patheos has the views of the prevalent religions and spiritualities of the world.
It won’t surprise you to learn that Accelerated Christian Education is patriarchal and sexist. It’s not a secret that fundamentalism and the women’s movement aren’t pals. But this was something I barely noticed as an ACE student. I was so steeped in the culture that it didn’t seem strange to me to depict women as subservient to men. So I asked Lana, of Wide Open Ground to explain what it was like for her. Lana has some great and insightful posts about patriarchy in fundamentalism.
Before we get to Lana’s post, just check out this example of what I mean. It’s from the third edition of Social Studies 1042. It’s now replaced, and I haven’t seen the new edition, but it’s typical of ACE – just a random story about a woman’s place in the home, apropos of nothing. The lesson is actually about George Mueller. They just put in the patriarchal reinforcement for kicks. 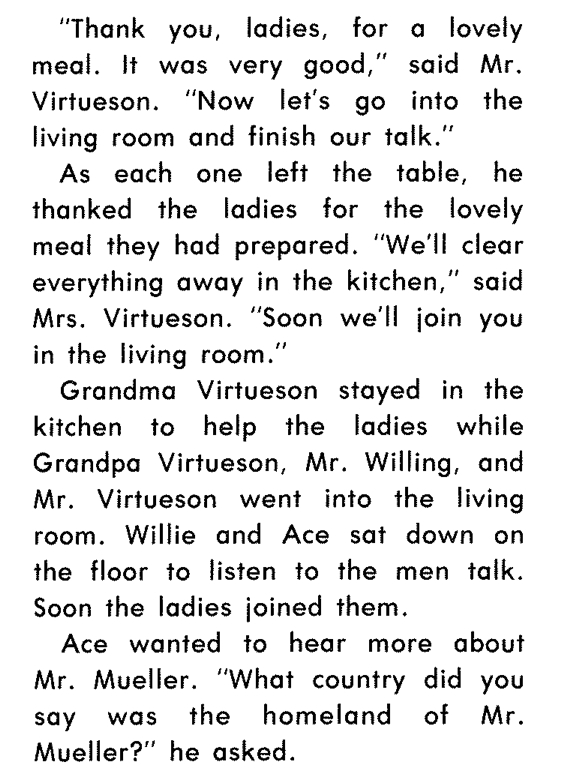 Here’s Lana.
My familiarity with A.C.E. mostly extends from 7th grade through 10th grade. This is the period when the insanity of A.C.E. work really begins to expose itself because the gap between regular high school public school work and ACE becomes too huge. These are the years where I can really see that A.C.E is more concerned with indoctrination of their fundamental ideals than education itself. Here I will explain and touch up on their agenda concerning the roles of men and women.
First of all, it’s important to understand that in fundamentalism, education is primarily religious. Fundamentalists say this quoting verses such as, “The Fear of the Lord is the beginning of knowledge.” In other words, without the fear of the Lord, without evangelical Christianity, they believe, education is an illusion. Perhaps this alone is offensive to non-religious people; however, for fundamentalists, its much more than just a Christian education.  Fearing the Lord involves a high moral standard of who God is (as infinitely holy), and who we are (as sinners), and while living in this giant gap between the great-righteous God and rotting-wretched people, the fundamentalist must labor and strive to meet the impossible heavenly standards: no dancing, modest clothing and dresses for women, strict gender roles, no rock or even contemporary Christian music, and on down the line. This is why curriculum such as the PACES from A.C.E., the textbooks from Bob Jones, and the Wisdom Booklets from ATI exist. Education is about learning the fundamental agenda.  The fundamentalists either must homeschool (as we did) or go to fundamental schools.And so in textbooks each and every lesson must contain the fundamentalist agenda. In regular school, kids just learn grammar. Not in A.C.E. While underling subjects and verbs, the kid is actually reading about George Mueller or some other missionary. In the history PACES, every uber-evangelical is brought up over and over, and every government lesson reinforces that the “Biblical” family (aka. The fundamentalist one) makes a healthy society.

This is where a gendered childhood comes into play in A.C.E.  In an 8th grade English pace, students, seemingly studying parts of a sentence, are actually underling words about women submitting in the home. This is particularly ironic because sometimes the word wife is often used as the subject of the sentence (rather than the direct object) while the content of the sentence itself makes her out to be the object of man, her subject.

Modesty and purity are equally emphasized. Again, in the middle of non-related subjects, kids learn these lessons. In the high school math paces, the books have what they call “Wisdom” lessons that teach the importance of purity and no-dating. Dancing is called out as a sin in a history pace. The Biblical family that is talked about in government lessons in actuality refers to the traditional home where the wife submits to her husband. Women always get the worse end of modesty and purity although both genders have it rough. Women – as seen in the pictures of the PACES – wear dresses, and it is women, if she touches a man even in a dance, who will arouse him and cause him to “lust.” Finally, the PACES reinforce gender stereotypes. This is seen in the way the mother is always at home while the father is working, such as in this math pace:

These examples are all over the PACES. The PACES have their own characters (like a story) that they weave throughout the books. The women characters strictly enforce these roles, such as being a homemaker or music teacher, not a principal. And then there is the career paces in 7th grade where girls are pictured as homemakers, missionaries, and secretaries. A female student inspiring to be an astronomer, a phd scientists, will be sorely disappointed, as will the male student who wants to be a stay at home dad.

And so education, the fundamentalist says, is not just about learning core subjects. Its first and foremost, about indoctrination into the fundamental agenda. In fact, in A.C.E. every pace has fundamental lessons. Since I experienced such a gendered childhood (from church, home, friends, family, curriculum, etc), I can attest to not only the pain, but also the craziness that a girl feels inside, especially the confusion of one bent on having a career or one who enjoys wilderness backpacking that goes against the fundamental portrayal of what a godly girl/woman should be doing.
Check out more from Lana at WideOpenGround.com.
Related posts:
Previous Post

March 21, 2013
Why are UK Creationist schools getting funding?
Next Post