“In the Footsteps of Francis and the Sultan” Lends to Understanding, Dialogue

“In the Footsteps of Francis and the Sultan” Lends to Understanding, Dialogue April 26, 2013 Lisa M. Hendey

Recently, I received a review copy of the fascinating DVD In the Footprints of Francis and the Sultan: A Model for Peacemaking. A project of Franciscan Media, this project was funded by a variety of sources, including the USCCB’s Catholic Communication Campaign. One of my favorite movie reviewers, Sr. Rose Pacatte, recently called the film “a prophetic resource for our times”.

Certainly, this DVD landed in my inbox at a timely moment when — once again — our country is awash in rehashing religious debates that result in the wake of any act of terrorism. The beauty of a project such as  In the Footprints of Francis and the Sultan is the tremendous model presented for true conversation. In the film’s opening segment, narrator Kathleen A. Warren, O.S.F. calls the film a “story about mutual respect and understanding, the kind that allows us resolve conflict through dialogue…”

Sound like something we need right now? I’d vote “yes”.

Indeed if we hope for any peace in this world, that dialogue exemplified by the encounter in this film between St. Francis and Sultan Malek al-Kamil must be born anew in our times. Here is an overview of the DVD:

This video shares the story of St. Francis and Sultan Malek al-Kamil and a little-known thirteenth-century peace initiative in the Middle East. In 1219 during the Fifth Crusade, Francis took it upon himself to cross battle lines and reach out to the enemy. These countercultural efforts of Francis, a simple friar, and Malek al-Kamil, the leader of the Muslim forces of the Levant, made these men most unusual in their time. This video examines their efforts on behalf of peace in order to help us, in our time, negotiate interreligious misunderstanding and hostility, and other difficult encounters between conflicting peoples.

The story in the film is shared in compelling fashion, making its two-part, 22 minute segments a terrific resource for any family, classroom, ministry or individual looking for an informed, rational perspective in such trying times. The film offers perspectives from multiple expert voices including Michael Cusato, Michael Calabria, Murray Bodo, and Fareed Munir, as well as Imam Yahya Hendi and Archbishop Michael Fitzgerald. Find a full overview of the DVD here and a downloadable resource companion here. I’ll be watching this film again with my husband and high school son and look forward to the compelling conversation that’s sure to follow.

Here’s a sneak peek at the documentary:

To order In the Footprints of Francis and the Sultan: A Model for Peacemaking or for more information, visit Franciscan Media.

April 25, 2013
Social Media's Impact on the Boston Tragedy: A Faith Perspective
Next Post 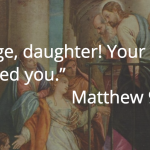