Ash Wednesday: repentance and solidarity with the crucified

Ashes to Go. It’s the latest trend in the mainline Protestant church for celebrating Ash Wednesday. Pastors get up early in the morning to stand in front of their churches with a black thumb while their parishioners drive through and get their foreheads stamped with a smudgy cross on the way to work. I’m doing it this Ash Wednesday on Tulane’s campus under the Stern breezeway where I give out donuts and hot tea every Wednesday morning.

Some of my fellow pastors like to gnash their teeth about “Ashes to Go.” Because it seems disrespectful to the liturgical solemnity of Ash Wednesday. For what it’s worth, I hate the consumerist label, but I love the public witness of administering ashes to commuters on their way to work. What makes less sense to me is to hold a Wednesday evening worship service in which people receive ashes that they’ll wash off an hour later when they go to bed. The whole point of the ashes is to wear them the entire day as an act of public penance, a symbol of our repentance and solidarity with the world’s crucified.

The best scriptural foundation for Ash Wednesday is Ezekiel 9:4 in which God says, “Go throughout the city of Jerusalem and put a mark on the foreheads of those who grieve and lament over all the detestable things that are done in it.” Ash Wednesday is a day of mourning for sin. But its symbolism is important. If I were mourning other peoples’ sins, I would be blowing ashes into their faces. On Ash Wednesday, I mourn my own sin, which is to say I mourn the way that my arrogance, lust, greed, gluttony, envy, laziness, and anger contribute to the global systems that create injustice. On Ash Wednesday, I ask Jesus to save the world from me.

Many American Christians today operate with a very diminished understanding of sin as mere rule-breaking and insubordination. Sin describes the oppressive weight of every deformity of human relations in our world. If you live above a certain income tax bracket level, you may not always feel the brunt of this weight directly, but the majority of human beings in our world are being crushed by our collective sin. Think of all the lives that are destroyed so that a line of cocaine can be snorted in Hollywood. Our appetites and idolatries do not happen in a vacuum; they are all entangled and intertwined together into a global market whose invisible hand is not divine but demonic. My sin contributes to the global apparatus of sin that causes famine, sex trafficking, terrorism, unemployment, and every other manifestation of injustice.

So when I put ashes on my forehead, I’m not saying, “Look at me, I’m a shiny happy Christian, don’t you wish you were as awesome as I am?” I’m saying the world today is unacceptable and I am responsible for my part in creating it. It is an act of public repentance, and it’s the perfect way to do it. I’m not making a big speech in which I put on a fake performance of exhibitionist humility. I’m simply making my face look a little bit weird and less attractive for one day as a declaration that I am not okay and I want to do better.

Of course it’s not just ashes that will be on my forehead tomorrow; the ashes (ideally) are shaped in the form of a cross. Jesus told the crowd following him in Mark 8:34 that if they wanted to be his disciples, they had to take up their crosses. When Jesus said these words, he wasn’t talking about the 14-carat gold jewelry we wear around our necks today. In Roman civilization, carrying a cross meant that you were a condemned criminal on the way to your death. It was an invitation for the people who encountered you to mock you, spit on you, and beat you, because you had forfeited your dignity as a member of the human community.

So to take up your cross means that you walk in solidarity with the condemned, those whose humanity is utterly rejected. Note that this a very different thing than the “persecution” that some Christians today want to claim for themselves. It’s farcical to solicit “persecution” for yourself by persecuting others. Losing hegemonic control over a country’s social mores is not the same thing as being persecuted. Christians are supposed to be persecuted because of their solidarity with the marginalized, whether it’s people of color, incarcerated prisoners, LGBT folks, Muslims, undocumented immigrants, the poor, or another group of people who are being crucified.

So wearing an ashy cross on your forehead is a modest, unobtrusive way of saying I stand with the people who are judged by everybody else because that’s who Jesus stood with and that’s why he was murdered by the religious leaders of his day. Jesus’ cross is solidarity with all of us as both sinners and victims of sin. None of us are innocent and none of us are not wounded. This recognition is where I need to start in my journey of repentance from my own sin.

I am not merely responsible for not intentionally breaking God’s rules or hurting other people. As one who has received the mercy of God, I am responsible for being the mercy of God in the world. The world that Jesus is seeking to create is a world where everyone walks with the world’s crucified so that their crucifixion will stop. My ashes signify my dissatisfaction with how I am living in the world, and my commitment to the kingdom that Jesus is creating through his crucified disciples. 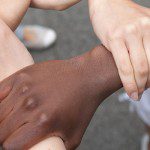 February 9, 2016
A Lenten Fast of #EmbodiedSolidarity and #TrueReconciliation
Next Post 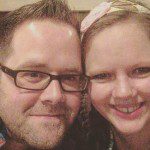 March 3, 2016 Guest post: What if the prodigal son had Xanax?
Recent Comments
0 | Leave a Comment
Browse Our Archives
Related posts from Mercy Not Sacrifice