When Other Daughters and Sons of Patriarchy Are Trapped 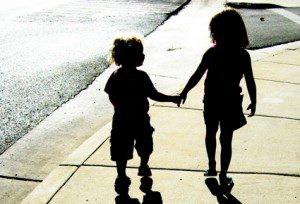 With all the ex-conservative homeschooler blogs out there nowdays, people may be under the impression that homeschool fundamentalism has viritually disappeared among homeschool alumni. To be sure, this Christian movement among homeschool graduates is dying a very slow and painful death. But it is so far from over, and I have so many friends still trapped in the ideology that I constantly feel the tension with old friends and old hangouts.  Here’s just a few  very recent encounters I had with a few graduates

The first story comes from a young girl Charis who writes of the “single homeschool girl dilema.” After a gap year a few years too long, she had planned to finally attend college this year and “finally get away” and finally “not be responsible for anyone” (read: not be responsible for siblings, family, etc). But instead earlier this year she met Mr. Right and is now engaged. She says she is mourning, not because she does not love her fiance (she does), but because she will never know what it’s like not to be responsible for anyone. She will never know what it’s like to be on her own. Now, she says, instead of being under her father’s authority, he will “transfer” that authority to her new husband.

I know a lot of people get married young, but keep in mind this girl will never get to live on her own, ever, not even for a year. And also, marriage in a quiverfull ideology has no “you” (as Vckyie Garrison over at No Longer Quivering says, “there is no you in quivering”); it’s only responsiblity and submission. There is no space to become your own individual thinker.

Charis is right. If she does not leave the house first, she will never get out.

In a parenting discussion, Elizabeth writes that her parents let her color during church even when she was nine years old. She says this has damaged her relationship with God up until this day because she learned to tune out God, rather than listen to his prompting. So she says that even a one year old should be made to sit still during church, listen to the commands of their parents, and follow the instructions.

And I think of her children in the future, picking up the broken pieces.

Andrew says that if his children come out gay, he will kick them out on the streets.  He will do this because a heart of rebellion is a bad influence to other siblings.

—-
Because I was once one of these people (except the putting gay kids out on the street part – I never went that far), I identify with their pain, and I struggle with words to help, waiting patiently for them to break free. Breaking free is not easy because then they likely face their families and communities looking down upon them. I have always said that in a way, I wish I could turn back the tables and just be content in my submissive role; it would be easier and less shameful. But then I look at the great big world, and remember why I left.