Covering Up the Body Before Puberty

Covering Up the Body Before Puberty October 8, 2013 Suzanne Titkemeyer 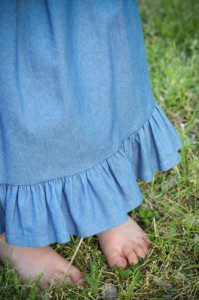 I recent post by Aletha really stood out to me. This is where she talks about where the pain of modesty began.

I started developing breasts when I was 8.  The first time I ever thought about them was in kid’s Sunday School.  I had been wearing a dress that I loved. It had flowers, and a petticoat, and lace.  It was also a year old, so it was a bit tight, and a bit short.  But it was my favourite.  It was, apparently, also a bit low cut.  I don’t know how much cleavage I was showing, but a Primary teacher took me aside and told me that my dress was immodest, and I should cover myself better next time. I didn’t want to cause problems for boys, did I?

I’ll repeat, I WAS 8! I didn’t even know what problems boys could have, except cooties.  But that was the first time I felt that my body was disgusting.  I was ashamed of my body, ashamed of being called out.  That wasn’t the last time, though, that I would hate how I looked.

See, it’s not really about “tempting” boys, is it? Because the teacher was talking to a kid, not some grown woman who was running around intentionally trying to flash her breast in public. This is not to say boys and girls aren’t sexual beings; I think we all are. But seriously, what’s up with forcing a 8 year old girl to make her own developing body to be some kind of “sex” sign. That? ugh.

But that just flashed so much in my mind, and got me thinking. I had to cover up my dang body looooong before puberty. I had to wear skirts below the knee, and long swim wear (I didn’t even get to wear a one piece, no seriously), and high collars, etc, etc. BEFORE PUBERTY.  So we were hiding my body when I was 7 years old so who wouldn’t look at me?

I remember another time when my sister did a film. We had about 20 homeschool kids on a small film set, with only one bathroom. One of the homeschool moms said the boys were not allowed to change SHIRTS in front of each other, say behind a tree, so the bathroom lines got waaaaaaaaaay out of hand.

No matter how I try to think of this, it’s all just super creepy to me now. As one who got no sex education at all, I sure was taught a lot about sex before I even developed.

When I see little kids in their backyard naked, I just usually say to myself, “thank God they get to be two.”

I hope you read the rest of Aletha’s post. Good stuff.

October 7, 2013
Quoting Quiverfull: Inherit the Earth by Having a Large Family?
Next Post

October 8, 2013 Laughter Is Good Medicine: Five Degrees
Recent Comments
3 Comments | Leave a Comment
"1, Yeah, Doug, you could be categorized as two different things because what makes one ..."
Emersonian ‘Black and Tan’ – Uncle Doug ..."
"What struck me is that Ken writes with more feeling about Alyssa and her long ..."
Cynthia Ken Alexander, White Entitlement and Fertility
"https://uploads.disquscdn.c..."
Raging Bee ‘Black and Tan’ – Uncle Doug ..."
"No. He advises orthodontists on their office practice. No medical or dental training, just advice ..."
Cynthia Ken Alexander, White Entitlement and Fertility
Browse Our Archives
get the latest from
No Longer Quivering
Sign up for our newsletter
POPULAR AT PATHEOS Nonreligious
1