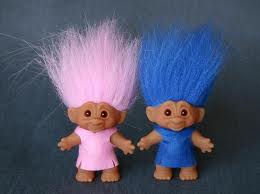 My early years of my childhood were filled with a lot of rules. My family started homeschooling in the early 90s when I was 6. My first two years homeschooling were really fun. We did a ton of field trips and park days, and I still had my trolls. Lord knows I loved my trolls.

Then the homeschool community introduced us to it all. We threw away the trolls, started wearing dresses most of the time, didn’t watch TV (although I’m still thankful for this) or movies or play video games. We studied character qualities, studied anger management, meditated on God’s words, memorized Matthew 5-6, memorized as many other Biblical commands as possible, learned manners, lost our toys if we forgot to say thank you, and were spanked if we were disrespectful.

We had a good nearly 10 years of trying hard to keep the law.

See, my parents came from dysfunctional and spiritually dead homes. But like all young parents, they wanted to be different. Conservative homeschooling sold a package deal to healing marriages and creating healthy children who loved the Lord.

This is one of the many reasons I burned out of facebook because even to this day, someone is always enlightening me about a problem in my spiritual walk. For example, last year I shared a photo that was really meaningful to me. It had a picture of a family cycling across a continent –  but the saying in it used the word bull sh##. My close friend messaged me to tell me he had blocked the photo from his newsfeed.

He was trying to be my conscience.

This brings me to my next point. There are so many laws in conservative circles that one is surely to always break one or two.  So this is where community conscience and accountability comes into play.

My dad used to attend men’s accountability meetings with other homeschool dads. He will describe this as very exhausting time of his life where he got beatings so to speak for not waking us up for wisdom search (Bible study) or not being a good enough spiritual leader.

I remember one heated situation in my life. My best friend decided to hold me accountable to something, even though I told him I was not signing up to be accountable. He ended up not speaking to me for a month, until I repented and would be restored to the fold. I had been far from perfect, but because he had been taught big ideas about holding people accountable, it created drawn out wounds where in a healthy situation he would have said, “Hey, Lana, you hurt my feelings” at which I would have respond, “Oh, I’m sorry.”

Why do I bring this up? Well, if you noticed, when Doug Philips wrote his resignation letter from Vision Forum ministries, he blamed his sin at least in part on a lack of accountability.

I thought too highly of myself and behaved without proper accountability. I have acted grievously before the Lord, in a destructive manner hypocritical of life messages I hold dear, inappropriate for a leader, abusive of the trust that I was given, and hurtful to family and friends. My church leadership came alongside me with love and admonition, providing counsel, strong direction and accountability.

And to me, that’s the saddest part of it all. He still doesn’t get it.

See, Philip’s stay at home daughters movement is an accountability technique. Women are the weaker vessel, so we need to stay home and be held accountable.

In the book Chucking College,  one Stay at Home daughter relates that if she had gone to Vienna with her college, she might have lost her morals, quoting Philips.

“For what will it profit a man if he gains the whole world, and loses his own soul?” (Mark 8:36) was one of the verses that helped me decide it was time to leave college. As a cellist, I had the opportunity of traveling to Vienna with the college symphony orchestra and playing in the world-famous concert hall where the Vienna Philharmonic televises their annual New Year’s Eve concert. But I realized that most of the students would drink heavily in Europe, where the legal drinking age is lower. In fact, I could not even find two acquaintances who would agree with me not to drink on the trip in order to visit historic sites instead. By going on the tour, I would have been under constant peer pressure while immorality ran fast and loose at night in the hotels.

So there I was that April my freshman year coming to an end. I knew my choices: gaining “the whole world”and losing my soul (which the whole college environment was wearing down), or chucking college and finding a path of success where my faith could thrive. The faith eroding atmosphere at college was too calculated for me to hope to keep both Vienna and my soul. (Imagining now what would remain of my faith if I had endured another year or two or three of college frightens me. I know that I would have been on shaky ground at best. But, praise the King, He had other plans for me.) I gradually realized the seriousness of my remaining in college, and began my exodus.

Doug Phillips has said, “College is a trip through Babylon. If the academics don’t get you, the dorm life will.” The Creator’s forbearance toward all the immorality rampant in dorm life and the misinterpretation of His Word prevalent in classrooms will eventually come to an end. He is a righteous Judge, and like He did with Sodom, He will judge those who are immersed in a culture of lawlessness.

The same goes for guys. Rather than teaching young men not to blame women for lust, they teach girls to put on more clothes, and couples not to kiss until their wedding day. By assuring that a guy and girl never get in the car together, and parents always chaperone the couple, this assures that they don’t have sex.

Another good example is the movie Fireproof. Ben at Formerly Fundie sums this up well.

It’s not. Addiction is hard to beat, and even when the addictive behavior is gone other behavior patterns remain which need some serious therapy. The message that you can just “repent” and walk away from addiction via willpower alone and everything else works out? I’m not a fan of that message, because it makes light of the real struggle so many face.

Accountability partners, crushing computers, putting on more and more and more clothes, are all flesh techniques, but it doesn’t work.

It doesn’t work for two reasons.

First, it just doesn’t work. People still end up looking at pornography, yelling at their wives, or passing on pain to their children. All the stories at Homeschoolers Anonymous are an example of this.

Second, it doesn’t work because it doesn’t change the heart. If you notice, Jesus didn’t talk about what we talk about. He never talked about homosexuals or gender roles. He never said to put on more clothes or kick out the rebellious teenager.

He said if you hate, you’ve murdered. If you looked at a woman with lust, you’ve committed adultery.

He said if you’ve kept the law, only then can you cast the first stone.

When I was wrapped up in the law myself, this made me exhausted. How could I ever measure up? I was so busy trying to do it all, I wanted to pull hairs. Now that I’m an adult I understand what Jesus was trying to tell me.

He was trying to tell me to stop focusing on outward laws. As Paul says, the more you focus on the law, the more you want to break it.

He was trying to tell us to stop bringing everyone else into conformity and instead place love in the shared space between us.

Laws get in the way of love. As a kid, Mom and Dad missed out on many opportunities to love us because they were too busy correcting our behavior. I know I’ve made some of these same mistakes with the foster kids.

Our conscience is actually exercised in relation too. When I love my mom and she loves me, I don’t want to hurt her.

This is why people lash out.

This is why we hold people accountable.

This is why we shove out people in our communities who don’t conform.

This is why we gossip.

This is why we have stay at home daughter movements.

I don’t know how to go about all the right things, but this I do know: accountability is not the answer.

We can’t put our faith and conscience in the law. It must be in relation to God and other people.

As Jesus said, love your neighbor as your self and love the Lord your God. This is the greatest commandment.

December 10, 2013
Quoting Quiverfull: Have Yourself Some Merry Little Selfishness?
Next Post

December 12, 2013 Quoting Quiverfull: Who Decides the Definition of "Apostate"?
Recent Comments
5 Comments | Leave a Comment
Browse Our Archives
Follow Us!