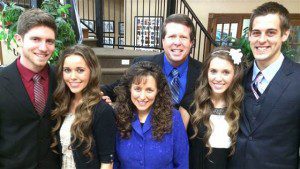 A lot of people have pointed out how many Christian groups and churches are anti-gay. Even though these Christians love to say that they love the sinner and hate the sin, it does not remove the pain that a gay person has to face. If a gay teen comes out gay, the church will still pray for him and believe he needs to change. Sure the church claims to love the teen, but he’s still told he is sinning, and there is still that voice that something is wrong with him, and that he needs to change.

This is the same reason I am against courtship so much. There is nothing wrong with a couple choosing to save their first kiss until they get married. It’s silly, but it’s not immoral. But that’s not what courtship is about. Courtship is a high standard designed to keep the couple accountable, and after the lainess are drawn in the sand, people who overstep those boundaries are failures.

Take the latest Duggar girls’ courtships as an example. The girls say they need accountability, so that’s why they have siblings or parents go with them on dates. They claim they are inspiring their younger siblings and girls on TV. But you know what they are actually doing? (Besides making their parents look like control freaks.) They are drawing hard lines in the sand, and therefore, anyone who breaks them is doing wrong.

The implication is not only that they would be doing wrong to break them, but also that anyone else breaking those rules is doing wrong too.

Sure there is room for nuances. I suspect the Duggars would say that some people pray about this, and decide it’s okay to hold hands, and in their family, they’ve prayed and decided not to hold hands. Those are nuances, and they are trival to the point.

The point is that courtship is a way of life that says that it’s a sin to “give” anything physical “away,” and that parents need to oversee this. It also says that dating without purpose (aka. a guy asks a girl on a date without intending to be serious about marriage on the first date) is wrong.

This is an extremely dangerous teaching. It’s the “us vs. them” attitude. It’s prideful. It’s judgment. It’s broken.

As soon as someone finds out that you’ve kissed someone before, you’re immeditely an object of investigation. You are not as high a quality. You broke the homeschool rules.

This is why I spent most of today wacked out after watching the Duggar show last night. Mr. Duggar was drilling the guy Jessa is courting. That’s wrong. That’s prideful. That’s judgmental.

He controlled them such that says they need to report to him if they decided to ever hold hands. Then Mr. Duggar tips it off by flirting with his wife in front of his daughter and the guy she is courting.

I am frustrated because what the Duggars are doing is abusive, and it’s being shown on TV as if it is comedy. Then people on TV totally miss the point. I keep reading comments about how they have too many kids. That’s not the big problem. If they sent their kids to school and hired a helper and sent the older children to college, no one would think anything of it.

But controlling the daughter’s every move is spiritually abusive.

For years I’ve wondered how the Duggars manage to keep all their daughters at home. My sister and I decided against that one a long time ago. The internet and world were too big. Yes, it took me a long time to leave all of fundamentalism behind, but I always questioned things. The Duggar girls do not. But then, their phone calls and social life are monitored.

I am glad that Suzanne at No Longer Quivering has made note that the news media has finally connected Doug Phillips of Vision Forum, who sexually assaulted a young woman for a period of a few years, to the Duggar family. It’s not that the Duggars have sexually assaulted anyone. But, but. they are following the very teaching of courtship and stay at home daughters that allows women to be vulnerable to an abuser. The control they put their daughters under is quite frankly terrifying.