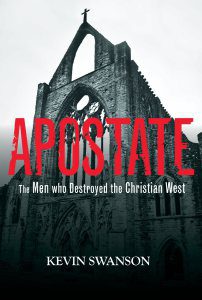 This series reviews Kevin Swanson’s book Apostate. I will try to have one review out a weekend. See also my discussion of the Preface and Chapter 3.

Kevin Swanson’s book Apostate devotes a separate chapter to different men that he believes destroyed the Christian west. However, before he discusses those men, he spends two chapters introducing the material.

What initially struck me is that he repeatedly (as in dozens of times) refers to those who disagree with him as humanists without ever defining the word humanist or humanism. Instead of defining his term, Swanson spends time to mock humanists for Harry Potter, homosexuality, vampires (apparently, vampires are real, real) et al. Here’s a quote of some sentences that appear to be rants.

“Under the influence of Satan, Karl Marx wrote a number of poems and plays.”

“What if their churches were afraid to correct societal sins like homosexuality abortion, or cannibalism?”

Swanson does not connect Harry Potter to the context of the western thinkers who destroyed the west although he additionally makes negative comments about muslim nations and remarks against cremation. His sources are news paper articles; not scholars of intellectual history.

Therefore, Swanson appears to define humanism as just man as the maker of his own destiny, or something like that. But he never actually defines it explicitly.

Swanson should have bothered to define humanism. This is especially important of a survey book such as his. Swanson is quick to praise thinkers such as Augustine and Calvin. Yet John Calvin was called a humanist, meaning that he was a Latinist. And the early church fathers provided the foundation of Christian humanism because the early church fathers believed that human dignity is expressed most clearly in the incarnation.

In other words, Swanson exalts thinkers who themselves identified as humanists. For example, this is not true of a Christian humanist: “Humanism has taught us to reject a God who is so connected to God.” Christian humanism taught us that human dignity finds ultimate reality in God. He ignores this, of course.

Swanson can use and define humanism in a secular context rather than Christian context, but no philosophical book is coherent until the author defines his terms.

Swanson gets off to a bad start by defining epistemology in one sentence(“Epistemology is the study of what is true and how one determines what is true”), and spending the next several paragraphs to talk about the Bible.

Thus Swanson is able to further argue that we need the Bible to define and give meaning to all truth. In other words, he has simplified epistemology to just one simply question: “what does the Bible say is true?”

Hence, we have science, or logic or observations or testimonies or any number of other tools to build justified beliefs. Although most philosophers do not accept the Bible as a source for a justified belief on the outset, even if we accepted the Bible as 100% accurate even in its current translation, none of that changes that the Bible does not spell everything out to us. It just does not.

Therefore, I want to be clear. This is the beginning of the book. If Swanson cannot admit any validity to the study of epistemology other than BIBLE (or special revelation), we are off to a bad start.

Here’s a quote from his section on epistemology, just to give the idea of how he cuts of all inquire that’s not a divine revelation or “Biblical” truth.

“As far as man will adopt God’s truth or stay connected to that standard, he will find truth. However, should he cut himself loose from tether of the truth of God and His revelation, he will wander aimlessly in the blinding snowstorm of relativism and eventually be reduced to brute paganism and ignorance.”

It is not true that one must be connected to God in order to find truth. Think of it this way. If all truth is God’s truth, as the scholastics said, than truth is common to all. Swanson, however, attacks Aquinas for stating that the nonbeliever can find truth. Swanson does not want to follow this logic because he feels strongly that the fallen man cannot find truth (see chapter 3 on Thomas Aquinas).

However, Swanson has a problem. If he thinks fallen man cannot discover truth (or that he will be reduced to ignorance), then  this would mean that common “truth” isn’t God’s truth. For example, if an atheist believes that our heart pump blood, is this not common truth that came from God? By Swanson’s logic, he should answer no, and in answering yes, he would be already invalidating his argument.

Secondly, all nonbelievers are not relativists. They aren’t all pagans and ignorant either. It’s a really bad idea to make these kind of claims in a book. Beliefs do not work this simply. I would argue that some belief systems lead to subjectivism (later on) more than others, but I cannot define these as Christian/atheist. Swanson’s categories are painful.

Swanson’s ethics and metaphysics definitions are also vague and oversimplified. I will not go through it as I think you have an idea.

The book is off to a shaky start as it lacks clear definitions and sources, makes sweeping accusations that prove unhelpful, and in general rants more about homosexuality and pop culture than sets the background needed for a philosophy survey.