Preparing To Be A Help Meet: Three Types of Women – Part 1 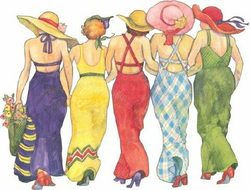 Sorry for the absence, folks!  I started a graduate school program and had a few action packed weeks.

Debi’s about to launch into some truly unique theology today – and she leads off by forgetting to cite the Bible.  Yay for editoral prowess!
“When God saw how lonesome poor old Adam was, he said, “It is not good that man should be alone; I will make a help meet for him.” [Ed. Note: Genesis 2:18] All females agree with God that it is not good for those wonderful eligible men to be alone!  Some men are slower to come to see their need for us tender sweeties than others, but most all men finally come to a place where they are genuinely lonely and want a mate.”
Debi loves painting with a broad brush.  According to her, every single woman in the world wants to be married.  Oops.  Married to a MAN.  Almost every man wants to be married – presumably to a woman.

Apparently, Debi can’t imagine being attracted to someone of the same gender.  (Or prefers to hide her blatant homophobia until her audience reads “Created to Be a Help Meet”.  After all, you can handle these things once you’ve been married for a while.)
“After observing all the animals in pairs and naming them (e.g., “Mr. and Mrs. Giraffe”), Adam came to understand the need he felt.  Only then did God wake him up to his new bride. The Bible records how the first couple found each other.”
“Mr. and Mrs. Giraffe” is so sickly-sweet that I want to barf.
“It was a marriage made in a garden. “And the Lord God caused a deep sleep to fall upon Adam, and he slept: and he took one of his ribs, and closed up the flesh instead thereof; And the rib, which the Lord God had taken from man, made he a woman, and brought her unto the man. And Adam said, This is now bone of my bones and flesh of my flesh: She shall be called Woman, because she was taken out of man” (Genesis 2:23) (sic)”

Odd editing mistake: The Bible quote from Genesis is actually Genesis 2:21-23.
“From this passage we can see that woman was made from the man’s body…in man’s image.  A woman reflects the man from which she was derived.  She was made from him and for him.  Eve (and by extension, every woman) was created to fulfill a need in the man.  He needed a helper who could meet his needs. So — a help meet, that is, a helper suited (meet) to his needs.  Her body, soul, mind and emotions were created to be a blessing and help to Adam.”
Genesis 2:21-23 is pretty clear.  GOD knocks out Adam, whips out a rib, and builds a woman.  GOD is the actor – not Adam.  God made woman in the image of God exactly as God made man in the image of God.
Genesis 1:27 is even more clear – even in KJV.

“So God created man in his own image, in the image of God created he him; male and female created he them”
Both men and women are in the image of God.  Woman is not a reflection of man or even built solely for man.
“The reason a good portion of your thoughts are wrapped up in thinking about certain men and the hopes of marriage is because you were hard-wired with the overwhelming need to be a wife and mother.  It is a God-given need that only a man can fulfill. “
Or because you aren’t allowed to have any life of your own until you marry.  I think that would make me daydream about marriage constantly if I was trapped at home.
” I can’t think of one thing I would rather have than a man to really love me.  It is supreme.  A lovely person is easy to love.”

What an odd series of sentences.  Notice Debi CAN’T say “Michael loves me.  I love being loved by Michael.  Because I am a lovely person, I am easy to love.”
No, Debi slides into an emotional defense mechanism because, on some level, Debi knows Michael doesn’t love her.  He can’t love anyone.
” That is our goal.  God wants to make you become a lovely help meet.  To be a good one takes effort….lots of effort.”
Being a good spouse or partner IS hard. Being in a long-term, serious, committed relationship takes work to maintain closeness. What Debi ignores – or glosses over – is that her patented method of having women submit mindlessly to their husband isn’t the makings of a healthy marriage.  No, Debi’s plan will actively drive couples apart.
AntiPearl: Happy is the man who finds a true friend, and far happier is he who finds that true friend in his wife.

September 14, 2014 Quoting Quiverfull: The Super-Spiritual Are Threatened by Equality?
Recent Comments
12 Comments | Leave a Comment
Browse Our Archives
get the latest from
Nonreligious
Sign up for our newsletter
POPULAR AT PATHEOS Nonreligious
1