Preparing To Be A Help Meet: Three Types of Women – Part 3 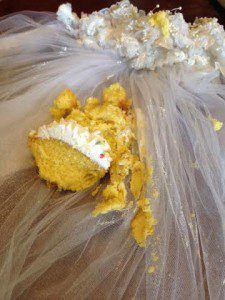 Debi moves on to Priestly/Steady/Servant women.

“My daughter who wrote the Teacher’s Guide for this book is a Servant, similar to a Priest type.  From the time she was a small child, she “mothered” her little sister.  She always enjoyed caring for the elderly.  She was a wonderful young daughter, helping me do anything around the house.”

That sounds like a miserable childhood, actually.  The daughter, who she never bothers to name in the chapter, is her second daughter Shiloh.

“She is a peacemaker, kind, and considerate.”

People never cease to amaze me.  Sometimes the apple falls far away from the tree.

“Because she was known for being such a sweetheart, she had 27 different offers for marriage.  My other girls had no such track record…not even close.”

That’s a creepy thing a parent to brag about.  The creepy aspect increases when Debi compares Shiloh’s number of suitors to Shoshonna and Rebekah.

I wonder if Shiloh would have preferred any of the other 26 men to the man she married.

“Men are not intimidated by a female with a kind Servant’s heart.”

“It is so feminine, very different from males. “

My husband walked in on one of our male milkers feeding a batch of orphaned kittens.  The milkers had set up a feeding schedule for the litter and would carefully wash and pet them so the kittens would get physical contact like the mom would have given.  Clearly, our milkers are actually female.  (I think I’m gonna keep that information to myself.)

“It is important for a Servant to not become a pitiful, little-brown-bird-person.  Maintain your individuality and develop your gifts.  Always keep in mind that it is good to be an Encourager, but not an Enabler.  An Encourager helps people better themselves.  An Enabler does things for people that they should be doing for themselves, healing their self-inflicted wounds and sympathizing with their poor vices to the point that they are enabled to continue their negative behavior without facing the consequences or assuming responsibility for change.  This simple concept could be key in your life.”

Debi, that’s freaking awesome advice! If you had followed this theme throughout the book instead of explaining how to be an Enabler with real-life examples, your book would be so much better.

“Girls that are of the Servant type tend to become Hidden Flowers if they don’t stay focused on serving the greatest number.  Keep looking for a vision.  Get a purpose in life that is bigger than you, homeschooling and even family.  Prayer will be an important part of your ministry.”

The only problem with this is that the ONLY example of a bigger picture in life Debi gives is in some kind of “ministry”.  No secular work outside the home, no advanced education, no volunteer work for secular or government entities is ever mentioned.

“An example of a Priestly/Servant type of man found in Scripture is, of course Jesus.”

Debi, you defined the Priestly type as being in the image of Jesus.  You can’t whip Jesus out as an example because he’s the basis for the explanation.

“The Apostle John must have been a Priestly type also.  A female example would be Ruth who faithfully served her mother-in-law.”

I’d like a little more information on how these two are Servant-types, but that’s not going to happen.

This section got me to thinking: How did things work out for Shiloh of the 27 marriage proposals?  Well, here’s her story of a “funny” moment at her wedding in the Teacher Guide of Preparing:

“My funniest moment came when I had only been married for about 30 minutes.  My Prince Charming and I were cutting our wedding cake together.  He sweetly fed me a bite of cake. Then, beaming, I picked up some cake to put in his mouth.  You need to understand that he is not one for old traditions!  Instead of closing his mouth like a normal, polite guy, he blew that big mouthful of cake out all over me.  I had cake all over my dress, hair and face.  The ladies watching gasped in horror, but the men burst into laughter.  My new husband and I both started laughing as we rubbed cake off my hair.  This might make you say, “How dare he?” but when we are 70 we will tell our grandkids and we will still be laughing.  I am laughing as I write.  You have to know my man to really appreciate just how funny it was.”
(Editor’s Note:

)
Shiloh, you may be laughing, but I’m not.
I know you grew up with Michael and Debi Pearl for your parents so you’ve been exposed to hurtful behavior chronically and have lost your perspective on normal, funny behaviors.
Spraying cake all over your beautiful wedding dress isn’t funny or normal. At best, it’s impulsive and destructive.  At worst, it’s insulting and degrading.  I hope you can see that one day.

AntiPearl: Show respect to all people, but grovel to none.

September 21, 2014
Quoting Quiverfull: Let's All Praise God For The Weather, Even The Bad Weather?
Next Post

September 22, 2014 Quoting Quiverfull: Are You 'Righteous' Enough?
Recent Comments
38 Comments | Leave a Comment
Browse Our Archives
get the latest from
Nonreligious
Sign up for our newsletter
POPULAR AT PATHEOS Nonreligious
1