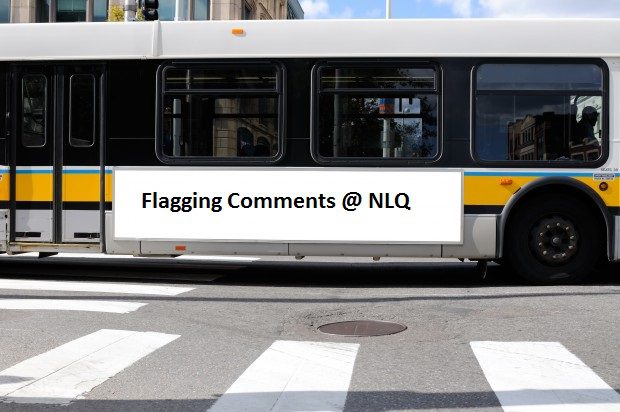 Disqus has the capacity to allow commenters to ‘flag’ any comment that they believe violates community standards. What flagging actually does is move the comment into the moderation queue for the Moderator to decide if it is okay to post or does it need to be removed. That’s all it does. It doesn’t tell Disqus that someone is a ‘bad’ meanie type person that should not be using Disqus, it simply tells the Mod that they need to look at the comment more closely.

Do not, I repeat, do not flag comments that you just don’t agree with. If someone takes it upon themselves to keep flagging comments, knocking them back into the moderation queue that have nothing wrong with them then that person will be put on moderated status and eventually banned if they keep it up. The mod will see exactly who it is flagging those comments and ban from that alone. It uses up time that the Moderator could be using to improve the site and makes everything run less smoothly.

Also, if someone is banned and they decide to take revenge on the Moderator by flagging the Mod’s warning to them to behave or the comment saying that they are banned they will not be allowed back. There is no unbanning for that, plus it’s plain old stupid since all it does it tell the Mod that someone is unhappy with being banned. It does nothing to the Mod or their ability to moderate the site.

Again, the job of the Moderator is to ensure that the comments stay non-hostile, non-abusive and do not threaten, hurt or derail the recovery of those at NLQ.

If you do see a comment that is hateful or violates community standards please do flag it. Just do not use the flagging function to try and ‘get back’ at others.