The implosion of r/atheism: What Reddit can tell us about building community

The implosion of r/atheism: What Reddit can tell us about building community June 7, 2013 Vlad Chituc

Many readers may have noticed a commotion surrounding recent changes on Reddit’s atheism forum. Matt Guay contributes a guest post to discuss what implications this may have for atheist communities.

I think it’s important to be upfront with my biases. Readers familiar with Reddit’s atheism community, r/atheism, may not be surprised to learn that I think it exemplifies many negative aspects of modern atheism—hatred, prejudice, and belief by cultural conformation rather than rational inquiry. Many might disagree, but I don’t wish to address those arguments here. Instead, I want to hold up r/atheism, or at least my version of r/atheism, as an instructive model of the challenges we’ll face as Western populations increasingly shed religious belief and look to new cultural identities.

For those of you who don’t know (and don’t worry, you haven’t missed much), r/atheism is one of the most popular forums on Reddit, with over two million subscribers. The subreddit is a content aggregator, where users can, in a democratic upvote and downvote system, submit and curate content pertaining to atheism, Neil DeGrasse Tyson, and overbearing parents who just don’t understand.

Yesterday, r/atheism was engulfed in outrage over a new change in moderation policy. The crux of the controversy is that a new policy prevents direct image links from being posted, emulating several other Reddit communities in preventing low-content “memes” and image macros from dominating the forum.

The drama that unfolds was a juicy bit of schadenfreude for many observers, with popular outcry seemingly disproportionate (in my mind) to the new policies which have gained popularity within other subreddit communities. Popular threads, upvoted to the front of the r/atheism forum, included:

“There is something that made this sub “the first step into a larger world” for tens of thousands of people, and you have taken that away. Congratulations.”

“Just admit it. EACH and EVERY additional rule implemented is a creeping concession towards theists feelings on religion. We need to be clear about this.”

“I became an atheist through being mocked as a theist.”

So, yes, the largest atheist community on the internet is in an unprecedented outrage because content, such as these (all of which were found in r/atheism’s top-rated posts), will be two clicks away, instead of one. To quote one irate commenter: “If this subreddit is not open and free, then I honestly don’t see the point. Socrates died for this shit and we’re taking it too lightly.” Your opinion may vary.

Now, two things are true. First, I deliberately picked some of the more over-the-top and dramatic responses to share here. There were naturally many shades of opinion in such a large and diverse community, and certainly many redditors (mostly outside r/atheism itself) strongly approved of the changes. Second, r/atheism has more content than the vapid images that I have shared here, and browsing through that list of top-rated posts will reveal as much.

It remains true, however, that a significant portion of this rather large atheist forum exhibited responses in line with the sentiments I’ve highlighted. And substantive as the content might occasionally be, hollow content tends to gain popularity due to simplicity, humor, and mass appeal. As witnessed with the growth of television in previous decades, mass popularity, especially coupled with Reddit’s democratically dictated content, ends up favoring simple, easily parsed material that’s promoted at the expense of more in-depth discussion and analysis. Several of Reddit’s larger communities are struggling to tip the balance in the other direction, experimenting with new rules akin to the new r/atheism policies.

What is troubling for r/atheism in particular is that the tone of this content often reflects pervasive anger, self-righteousness, and a sense of inherent superiority over believers, reinforcing stereotypes already leveled against the broader atheist community. That so many r/atheism members fought to defend this content specifically is an unsettling indication of the values that many who wear the label “atheist” possess.

It is therefore valuable for us to take a look at what is happening here, not because any of this petty drama is intrinsically interesting, but because it highlights that atheist communities are not immune from the ugliest aspects of religious communities—r/atheism’s hatred, intolerance, dogma, and us-vs-them mentality with regards to religion as a whole seems to directly hinder the causes of effective social action and accessibility to group nonmembers.

This is a broader incrimination than this moderation spat calls for, but these have been common complaints for some time. One doesn’t need to look much further than what other atheists on Reddit have been saying about r/atheism to notice this. I recognize that atheists living in more fervently religious communities may feel more tangibly a sense of conflict with organized religion, and that being surrounded by nonbelievers has made it easier for me to make peace with my Christian upbringing. It is easy to forget how infuriating actual interaction with those who use their religion as a cudgel can be, and it may be reasonable that people use online communities to vent. Still, there is no denying that r/atheism is widely criticized, even by other atheists, for its overt hostility and alienation of outsiders.

For anyone interested in the future growth of a new secular or humanist culture, it’s a valuable observation that just shedding religion does not cause religion’s problems to go away. These problems seem related only to the scale and popular appeal of a community, not its underlying ideology (one could make a similar case for r/politics, and I don’t even want to begin wading into pinning down connections with real-life pop cultures).

As the God issue is settled, we must be able to move past our anger with religion if we are to create a new, positive, constructive dialog with the population at large. We must begin to address the question of what to do in religion’s wake. Part of this challenge will be grappling with the sociological forces that seem to pervade large ideological communities, both religious and otherwise.

Of course, one cannot draw exact correspondences between the behavior of an online community and the more complex behavioral norms adopted over time by real-world cultures, but if we are to make any true societal progress and not lapse into a new dogmatic social institution, online communities provide ample data and simplified first steps into the complicated arena of understanding the forces which shape the emergence of these pathological social behaviors.

If emerging secular culture is to escape the pitfalls of scale and mass popularity, its members must be proactive in taking measures to prevent it. I can’t say how best to do this, and social theories have had little success so far in arriving at accurate prescriptive recommendations for such issues. But it must start by observing that we are not immune to the problems of the past, and it must continue with inquiry into what factors shape these sociological forces.

Moreover, we can hope to do better than the scholars of our past. Rationalism and empiricism have provided us deep insights into the workings of the world around us, and these tools are being extended past the physical sciences. Cognitive scientists such as Daniel Dennett, Jesse Prinz, and Jonathan Haidt, as well as evolutionary biologists such as David Sloan Wilson, have already begun explorations of theories of culture as complex adaptive systems, and I believe these tools will gain increasing prominence as research progresses and advances in cognitive neuroscience clarify theoretical underpinnings – I’m looking at you, memetics. We are in a unique position in history, for the first time developing the analytical tools to understand complex social systems and possessing far more data from those systems than at any time before. From this perspective, r/atheism is a canary in a cultural coal mine, and we should embrace the opportunity to study the illness if we ever wish to successfully grapple with the organizational challenges of a real-world movement. 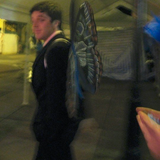 Matt Guay is a graduate student studying mathematics and neuroscience at University of Maryland, College Park. In addition to research in those areas, Matt enjoys learning more about evolutionary psychology and sociology, as they bring together modern theories of complex systems and the real-world problems they aim to tackle.

June 7, 2013 A Queer Atheist in the Heart of Mormon Country
Recent Comments
0 | Leave a Comment
Browse Our Archives
get the latest from
Nonreligious
Sign up for our newsletter
POPULAR AT PATHEOS Nonreligious
1