Why I don’t care about deconverting believers

Why I don’t care about deconverting believers September 1, 2014 Vlad Chituc

Atheists often justify their efforts to coax the faithful from their faith by noting how much better it is to have true beliefs. While I don’t think it’s necessarily appropriate in every context, when we try to convince a stranger of something, it should usually be to make their lives or the lives of other people better.

I’m on the fence about whether converting an earnestly religious and progressive Christian would do any good in the world, but I lean toward “no.” Even if it did, it wouldn’t be a trivial effort. A person’s religious beliefs seem to be as difficult a belief to change as possible—they’re personal, often hard to settle empirically,[1. I don’t expect this point to be uncontroversial, but suppose you have evidence that humans are the products of natural selection and common descent with primate ancestors. That might be evidence against Creationism, but it can’t on its own weigh against a progressive Christianity that recognizes evolution as the process God used to create man. Few religions seem to have as their foundational tenets concrete, empirical claims that science can weigh in on, and most religions, if tweaked right, can spit out empirically adequate explanations for just about anything science throws at it. This makes things understandably messy for the would-be God botherer-botherer.] and deeply tied to our identity and community. It’s hardly a surprise, then, that our beliefs on these topics can be so resistant to change, with debates repeating ad infinitum.

Over many conversations and many years, I might change a religious friend’s mind, but I probably won’t. If my goal is to make their life better, I’d be better off spending those years convincing them to wear sunscreen, cut meat from their diet, and get a bit more exercise every day. I’d certainly have an easier time of it. If I wanted them to believe what was true for capital-T Truth’s sake, I’d be better off buying them a physics 101 textbook than a copy of The God Delusion.

Though suppose my friend has religiously based views about sexual minorities or gender norms that I found regressive. Now should I try to deconvert them? I should certainly try to change their views, since I find them harmful, but it seems obvious to me that it’d be far easier to address these specific issues than the belief system their identity is built on.

Even if I were to change someone’s beliefs about God, what guarantee do I have that I would change their beliefs about sexual minorities or gender norms or anything else that I care about? There is no shortage of regressive atheists, and we need to look no further than what’s currently the most popular atheist channel on YouTube.[2. As far as I can tell, but someone please prove me wrong. At the time of writing, The Amazing Atheist Channel has about 600,000 subscribers, which beats any other major atheist channel I’ve seen a few times over.]

No matter how I square it, there’s almost always something more effective and useful for me to do than to convince someone that God isn’t real.

This is all very much to say that I don’t take deconverting believers to be a productive use of my time or this blog’s time, and that’s why we won’t do it. There are more than enough atheist blogs trying out there already, many of them at this very network, and the world won’t miss out on one more.

A less charitable reader may see all this and conclude that there’s a hypocrisy on the blog’s part, that we show no interest in deconverting the religious, but instead jump at the chance to persuade (read: “silence”) the “firebrands” of atheism. But New Atheism hardly seems to play the same role in our identity that religion does, and even more, I feel that New Atheism is largely wrong, harmful, and counterproductive. I think changing the ideas of some of its proponents would be beneficial, and, if those proponents are reasonable, not particularly difficult. But that isn’t the goal of this blog.

At NPS, we suspect that atheism hasn’t been fully represented, and that society’s image of atheism is skewed. We think that most nonbelievers would look at Richard Dawkins and many atheist blogs with a mixture of confusion and frustration. Atheism is bigger, better, and more diverse than it currently seems, and we hope to help fill in that picture more faithfully.

We think that there are more interesting things about atheism than whether or not God exists, and we’ll try to focus on these more constructive and tractable problems: What do we do once religion’s gone? How do we live good lives? How ought we relate to liberal believers? What about more conservative ones? Can we convince everyone to argue less and care more about recognizing each other’s humanity? Can we work together to build a better world? We think these are conversations that matter, and we hope you’ll join us in having them.

And at the very least, we hope you’ll wear sunscreen. 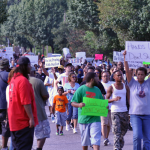 September 2, 2014 After Ferguson, toward a better humanism
Recent Comments
0 | Leave a Comment
Browse Our Archives
get the latest from
Nonreligious
Sign up for our newsletter
POPULAR AT PATHEOS Nonreligious
1