“We will respect and defend Christian Americans” – Donald Trump.

Promising to “restore faith to its proper mantle” in U.S. society, Donald Trump makes a pitch for theocracy at the Freedom Coalition’s Road to Majority conference.

On Friday, Trump spoke to the Faith and Freedom conference, a group of religious and social conservatives meeting in the nation’s capital. Pandering to the evangelical audience, Trump said:

We will respect and defend Christian Americans.

For emphasis, and clarity, Trump repeated:

In making his appeal to religious Republican voters, Trump pledged to honor “the sanctity and dignity of life,” and promote “marriage and family.”  The pledge is a not so subtle, coded message indicating that as president Trump would fight to deny a woman’s right to choose an abortion, and fight to deny the right to marriage for lesbian and gay citizens.

At one point the GOP presumptive nominee proclaimed:

People who go to church, who work and work in religious charities and so forth and share their values, these are the foundations of our society. We will restore respect for people of faith who dutifully raise their children, follow our laws and rules…

Much of it was a characteristic appeal to white Christian identity politics… The spectacle of self-proclaimed Christian conservatives cheering a foul-mouthed ex-casino owner for his pledge to turn away refugees tells you pretty much everything you need to know about what the religious right has become—or maybe what it always was.

Covering the story, Huffington Post notes, as they do on all Trump related posts, the following:

Donald Trump regularly incites political violence and is a serial liar, rampant xenophobe, racist, misogynist and birther who has repeatedly pledged to ban all Muslims — 1.6 billion members of an entire religion — from entering the U.S. 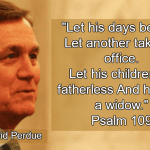 June 11, 2016 Oregon Court Allows Person To Change Sex To ‘Non-Binary’
Recent Comments
0 | Leave a Comment
"And JC said, starve the little chidren, for as much as you do it unto ..."
David Cromie Fox News Guest: Children Don’t Deserve ..."
""....are there no work houses....""
Erik1986 Fox News Guest: Children Don’t Deserve ..."
"Tsarist Russia was anything but a free market, and neither was the aristocratic system in ..."
Person223 Fox News Guest: Children Don’t Deserve ..."
"The right of males to reproduce, rendering a woman's reproductive organs chattel, disregarding the whole ..."
Anon E Moss New Legislation In Tennessee Would Allow ..."
Browse Our Archives
get the latest from
Nonreligious
Sign up for our newsletter
POPULAR AT PATHEOS Nonreligious
1