A Texas judge is under fire for promoting Christian prayers in his courtroom.

Every day Judge Wayne Mack begins his courtroom sessions with a Christian prayer. Understandably, this practice makes many people uncomfortable. However, despite threats of legal action, and a letter of caution about his courtroom prayers from the Texas Commission on Judicial Conduct, Judge Mack is promising to continue his unconstitutional Christian prayers in the courtroom.

Adding insult to injury, last week Texas Attorney General Ken Paxton released an opinion stating that Mack’s practice of opening each court session with a Christian prayer does not violate the U.S. Constitution.

According to previous reports, before courtroom prayers begin, a bailiff provides an opportunity for individuals to leave the courtroom and explains that participation in the Christian prayer will have no effect on Judge Mack’s decisions. However, some individuals fear that if they appear uncomfortable with the Christian prayers, the judge will be biased towards them when deciding their case.

In 2014, the Freedom From Religion Foundation (FFRF) filed a complaint about the inappropriate prayers. The following is an excerpt from a letter of complaint sent to Judge Mack by the FFRF:

We understand that in August you opened one of your court sessions with the Christian prayer. We believe that this is regular practice in your courtroom. A concerned Montgomery County resident who had business before you contacted us to report that after you entered the courtroom you stated, “We are going to say a prayer. If any of you are offended by that you can leave into the hallway and your case will not be affected.”

After that announcement, we understand that you introduced a pastor who read from the bible for more than five minutes. While the pastor was reading, our complainant says, “I felt that the Judge was watching for reactions from the courtroom; bowed heads, indifference, etc. I definitely felt that our cases would be affected by our reactions [to the bible reading].”

Our complainant further says, “Once the Bible reading was over we were then asked to bow our heads to pray. I was very uncomfortable and certainly felt that I was being coerced into following this ritual and that the outcome of my case depended upon my body language.”

Rather than putting an end to the offensive, illegal, and blatantly unconstitutional practice, Judge Mack is doubling down, and promising to continue the Christian prayers in his courtroom.

A lot of these attorneys have repeat business before Judge Mack, and not standing up and participating in this prayer practice could have serious consequences for their livelihood.

Grover is confident that if the issue is brought before a federal judge, the courtroom prayer would be found unconstitutional. However, Grover said moving forward with a lawsuit is no easy task:

In order to file a suit in federal court, we would need someone who has been exposed to these prayers by Judge Mack who is willing to be a plaintiff in a lawsuit. We are very much interested in pursuing this case further; it’s just a matter, practically speaking, if we can do that.

Judge Mack is wrong to entangle his personal religious beliefs with his judicial office. Promoting his Christian faith in the courtroom has a coercive effect on others, and gives the appearance that his judgements and decisions are predicated on his religious bias, rather than the law.

(Portions of this story were previously published here.) 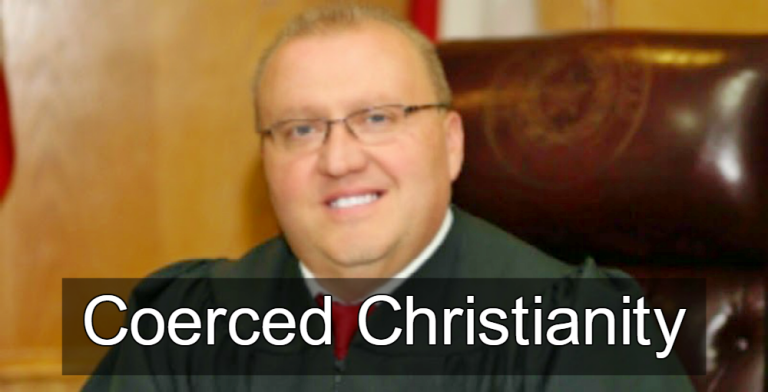