Good news: An Indiana church promoting hate against the LGBT community has been evicted from it’s building.

LGBTQ is a hate crime against God. Repent

The sign generated outrage from many local community members, and eventually images of the sign went viral, another example of the bigotry and hatred often promoted by conservative Christian churches.

Yet in a statement posted to Facebook, Remnant Fellowship offered no apologies to those who were offended by the display, declaring:

Put this on church sign to reach a wicked and filthy generation. I pray God grant some repentance and life before the great Judgements about to be poured on this nation. Especially the young people who have been sold lies so long and are [fed] a flood of filth every day. Jesus can save the vilest of sinners, many of us were saved out of wicked lives. Nothing is to (sic) hard for God.

The church’s Facebook post continued by stating that “wrongdoers will not inherit the Kingdom of God,” and citing 1 Corinthians 6, stating:

Do not be deceived: Neither the sexually immoral nor idolaters nor adulterers nor men who have sex with men nor thieves nor the greedy nor drunkards nor slanderers nor swindlers will inherit the Kingdom of God. And that is what some of you were. But you were washed, you were sanctified, you were justified in the name of the Lord Jesus Christ and by the Spirit of our God.

However, after the church was evicted from their building, and facing a growing public backlash, the church deleted its Facebook page. No word yet on where or if the church will relocate.

Obnoxious church signs from ignorant and mean-spirited Christians are a fairly common occurrence across the country because they are an easy and lazy way for conservative Christians to spread divisive and insensitive messages in an attempt to promote their fragile religious superstitions.

For example, earlier this year another Indiana church offered a sleazy justification for misogyny while blaming victims for sexual harassment. The sign, posted by the Emmanuel Baptist Church in Jeffersonville, Indiana, made the deplorable suggestion that women invite sexual harassment by the way they dress, declaring:

Bottom line: An Indiana church promoting hate against the LGBT community has been evicted from it’s building after generating public outrage and condemnation by posting an anti-LGBT sign. 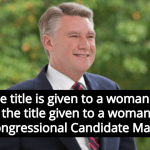 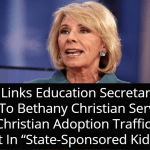