Good news: New Jersey Superior Court Judge John Russo Jr. has been permanently removed from the bench after explaining to a rape victim that she could avoid sexual assault if she only closed her legs.

A New Jersey judge who advised a woman to close her legs to prevent a sexual assault has been fired from his job, and can never work in the state again. The New Jersey Supreme Court permanently barred state Superior Court Judge John Russo Jr. from presiding over a courtroom on Tuesday.

The decision was unanimous, with the court citing “repeated and serious acts of misconduct” by Russo. Chief Justice Stuart Rabner said that it would be “inconceivable” for Russo to preside over any case involving domestic violence or sexual assault after making those comments, which he called “demeaning.”

A judge who suggested that a woman seeking a restraining order could “close your legs” to prevent a sexual assault was removed from the bench Tuesday by the New Jersey Supreme Court and permanently barred from presiding over a courtroom.

Do you know how to stop somebody from having intercourse with you?

The woman replied by saying:

Run away or try to get away.

Russo continued to press, and asked if there was anything else she could have done. The condescending and despicable Russo asked:

Block your body parts? Close your legs? Call the police? Did you do any of those things?

In the unanimous decision to remove Russo from the bench, Chief Justice Stuart Rabner wrote:

No reasonable victim could have confidence in a court system were he to preside over those kinds of cases again. No witness, alleged victim, or litigant should be treated that way in a court of law.

His overall behavior reflects a lack of probity and fitness to serve as a judge. And his conduct breached the public’s trust.

In light of respondent’s serious and repeated acts of misconduct, we are compelled to direct that respondent be removed from office.

Bottom line: New Jersey Superior Court Judge John Russo Jr. has been permanently removed from the bench after explaining to a rape victim that she could avoid sexual assault if she only closed her legs. 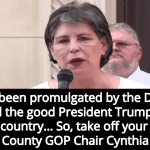 May 28, 2020 President Trump Tweets Video Calling For The Death Of Democrats
Recent Comments
0 | Leave a Comment
Browse Our Archives
Follow Us!