49% of Americans Think We’re Going to Lose Our Democracy

A new poll shows that 49% of Americans think that we are going to lose our democracy. I think that if the Republicans take over the Congress next November, that may very well turn out to be true.

A Republican win in November will put the exact same people who authored resolutions and voted to overturn the 2020 election in control of the United States Congress.

Think about that for a moment. A vote for Republicans in November is a vote to put the people — the same people — who tried to overturn our government and install Trump as a dictator in control of the House and Senate. It will give them the power to do even more damage to our country than they already have.

Rep Liz Cheney is a very conservative Republican. She’s about 10 clicks to the right of me. I do not agree with her on a lot of issues. But she is also someone who is willing to put her career on the line for this country.

She has said that the Jan 6 coup attempt was a conspiracy and that the movement to destroy our democracy is “ongoing.”

Many of you have carried arms in defense of America. Many of you know people who’ve lost their lives defending this country.

At this time, in this place, we have been given the opportunity to defend America. All we have to do is say “no” to the people who want to destroy it.

Just days away from the first congressional hearing on the events of Jan. 6, Rep. Liz Cheney, R-Wyo., called the Capitol attack a “conspiracy” and described its fallout as an “ongoing threat.”

The Wyoming lawmaker suggested the willingness of many Republican Party members to turn a blind eye to former President Donald Trump’s efforts to overturn the election in hopes of staying in his favor has, in part, created a “personality cult” around Trump, shielding him from facing consequences.

“We have too many people now in the Republican Party who are not taking their responsibility seriously and who have pledged their allegiance and loyalty to Donald Trump,” Cheney said. “It is fundamentally antithetical — it is contrary to everything conservatives believe — to embrace a personality cult. And yet, that is what so many in my party are doing today.” (Read the rest here.) 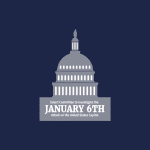