“Totally Under Control”: Analyzing (and Laying Blame for) the US COVID Response

“Totally Under Control”: Analyzing (and Laying Blame for) the US COVID Response October 14, 2020 Andrew Spitznas

It’s fair to ask if we need a COVID documentary at the end of 2020.  After all, we’re living this disaster as we speak.

My answer to this question is a definite yes, especially when handled by a veteran like Alex Gibney, along with his newer-to-the-table co-directors Ophelia Harutyunyan and Suzanne Hillinger.  Breathlessly prolific since 2005, Gibney won an Oscar for exposing US torture in Afghanistan (Taxi to the Dark Side), later enlightening viewers on Scientology (Going Clear), the Russian oligarchy (Citizen K), and WikiLeaks (We Steal Secrets).  And for my money, he’s given us the best in-depth look at the Catholic child molestation pandemic, in Mea Maxima Culpa.  (This is Harutyunyan’s first feature-length directing effort and Hillinger’s second, though both have been active in filmmaking for several years.)

I would argue we need a document of the US COVID non-response, as it unfolded across 2020, as a reminder for our fallible memories.  Even as a daily New York Times reader and a physician who’s tried to stay current, there are things I learned from Totally Under Control.  I knew our Nepotist-in-Chief had laughably, tragically appointed Jared Kushner to head up procurement efforts for PPE.  I didn’t know Kushner’s “expert staff” was comprised solely of unpaid volunteers, that he appointed his college roommate to lead the effort, or that he compelled Democratic state governors to grovel before Trump for masks and ventilators.  (A whistleblower, who courageously chose to disregard an NDA of dubious legality to go on record here and with The Washington Post, gives us the details.)

There are other places where Gibney, Harutyunyan, and Hillinger put the pieces together in helpful ways.  I knew that COVID testing was a disaster (hell, it took my son 12 days to get his result back in the summer).  However, showing all of the screw-ups since January gives credence to former HHS Secretary Kathleen Sebelius’ assertion that Trump and company were deliberately “slow-walking” the process.

I would additionally contend that watching Totally Under Control is good for your mental health.  The fear of taking ill and witnessing the negligent homicide of 200K+ of our fellow citizens have been collective national trauma.  In the face of trauma, it’s normal for numbness and detachment to set in.  The nonstop gaslighting from Trump, his political cronies, and his media enablers is equally numbing and exhausting.  So in this film, re-observing healthcare workers endanger themselves for lack of PPE rekindled my rage and sadness, as well it should.  As historian Timothy Snyder phrased it in his equally essential booklet Our Malady:  “Doctors in South Korea looked like they were coming from a science fiction movie; ours looked like they were coming from the Salvation Army.”

Speaking of South Korea, the co-directors employ a useful trick throughout this film of splitting the screen to show simultaneous events in the US and that country.  Both had their first known case on the same day, but in South Korea, the scientists led the response, while politicians followed behind.  When a doomsday Christian church and karaoke booths were determined to be major spreaders, health officials acted decisively, aided by comprehensive contact tracing.  In South Korea, COVID was largely contained by the end of January.

Totally Under Control follows a mostly chronological trajectory, from the January 3rd conversation between a CDC staffer and their equivalent in China, until the day of Trump’s own COVID diagnosis.  By sending cameras offsite and enclosing his crew in sterile tents, the three directors were able to safely interview a wide range of knowledgeable subjects, from NY Times and Pro Publica journalists, to epidemiologists and frontline ICU docs.  (Craven functionaries at the White House, CDC, and HHS ignored multiple interview requests.)

Certain themes recur across the timeline.  We have an administration that favors loyalty over expertise, so when a CDC leader tells the truth about the expected scope of the pandemic, Trump shoves her out of the chain of command and appoints Pence as head of his COVID response team on the following day.  Leaders are in place because of their wealth (Alex Azar) or evangelical religiosity (Redfield and Birx), not because of their knowledge or experience.

We see the downriver effects of a President who rejects science – and we don’t even get around to his embrace of the nutty “demon sperm” doctor.  However, we witness the start of the Hydroxychloroquine debacle, where Trump got weak-willed bureaucrats at the FDA and CDC to authorize emergency use of this drug on hospitalized COVID patients, in the absence of a single randomized clinical trial demonstrating efficacy.  A tweet by Elon Musk and a YouTube video stuffed with anecdotes from a primary care physician prevailed over the scientific method.

Near the end of his documentary, Gibney in voiceover correctly asserts that we are living in a moment when ignoring expert advice is seen as an act of patriotism.  I saw this for myself again this week, in a Facebook post from Republicans candidates in my home state of Tennessee.  They were gathered with donors to celebrate their inevitable victories next month in my deep-red state, and not a single mask was in sight.

We are living in two simultaneous American narratives.  There’s the fatally fake one, where life goes on as usual, and masks are unnecessary.  Then there’s the truth, outside the evangelical Republican death cult, where the pandemic is gathering strength for an autumn surge.  Totally Under Control is a necessary reminder of which narrative is the honest one.

And hopefully this documentary will spur more people to vote.  The only chance we the reality-based people have for science to triumph over political deception is to deliver the boot to Trump and his GOP lickspittles.

(Totally Under Control is available to stream on Apple TV, Vudu, and Fandango.) 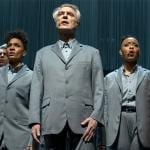 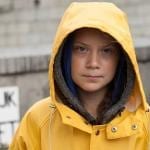 October 15, 2020 DIY Virtual Film Fest, Part 5: “I Am Greta”
Recent Comments
0 | Leave a Comment
Browse Our Archives
get the latest updates from
Secular Cinephile
and the Patheos
Nonreligious
Channel
POPULAR AT PATHEOS Nonreligious
1