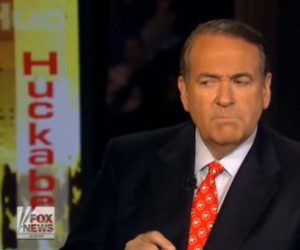 Huckabee has taken to repeating the lie that President Obama is a God-hating God-hater who refuses to say the word “Creator” when quoting from the Declaration of Independence.

This is a lie. Mike Huckabee is lying.

And Mike Huckabee is telling a particularly stupid lie. President Obama speaks in public, a lot. And almost every word he has said for the past several years has been recorded on video. So claiming that Obama never says something he says all the time — the president loves quoting the Declaration — either reveals Huckabee’s hamfistedness as a liar, or else it reveals his utter contempt for those in his audience, whom he assumes are too stupid not to just swallow every bogus word he feeds them.

Why does this lapsed clergyman believe that bearing false witness is OK?

September 5, 2012
Love dares you to care for the people on the edge
Next Post

September 6, 2012 We can have political debate or politicized facts, but we can't have both
Recent Comments
140 Comments | Leave a Comment
Browse Our Archives
get the latest updates from
slacktivist
and the Patheos
Progressive Christian
Channel
POPULAR AT PATHEOS Progressive Christian
1