You can fight City Hall (but if you take them to court, they get lawyers, too)

You can fight City Hall (but if you take them to court, they get lawyers, too) October 16, 2014 Fred Clark

The CEO of a local business is upset because the city has subpoenaed transcripts of a bunch of public speeches he gave earlier this year.

On the one hand, it’s kind of weird that the CEO is upset and that he’s claiming victimhood over this. These were public speeches in public settings — speeches that he had, at the time, public-ized. The CEO had crafted these words with the intent and desire to have them heard and read and disseminated as widely as possible. So it seems odd, now, for him to turn around and claim that the city is somehow violating his privacy or his right to … something or other, by attempting to read those speeches now.

It’s just weird that he is acting as though the city had subpoenaed his medical records, or his browser history, or his private diary.

But on the other hand, isn’t there something kind of creepy about the city just going around, willy nilly, deciding to subpoena private citizens for no apparent reason? Even if the particular materials being sought here — public speeches — don’t make this particular case seem intrusive, doesn’t this still seem like an abuse of power? Or, at least, doesn’t it seem like it might be similar to something that one could imagine turning into a form of something that’s close to what might become something like an abuse of power?

And that’s Bad, isn’t it? It seems bad if you look at it like that. We don’t like to think that the city can just go around arbitrarily issuing subpoenas for no reason.

Turns out, though, that the city does have a reason for subpoenaing these public speeches from this CEO. The city is defending itself in a lawsuit — a lawsuit filed against the city by … wait for it … that very same CEO.

Oh. So, in other words, this is discovery — the routine legal business that occurs whenever two parties go to court. The CEO’s speeches are part of the facts of the matter in question. In defending itself against the CEO’s lawsuit, the city has a right to access to those facts. Those facts — and those speeches — are what this lawsuit is about.

OK, but still … why is this CEO suing the city? Whatever the particulars of his lawsuit, he’s got to be the Good Guy in this, right? He’s literally fighting City Hall. Doesn’t that automatically make him the hero in this story? That’s how the trope works, after all — when a private citizen stands up to fight City Hall, City Hall is never the Good Guy in the story. 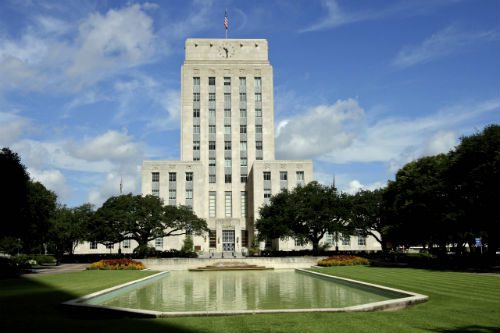 And in that capacity — when City Hall is acting in its proper role as the Good Guy — cities get sued. A lot. They spend a lot of time in court fighting lawsuits filed by slumlords, tax cheats, wage thieves, racketeers, polluters, and all manner of other powerful, wealthy scofflaws who have deeper pockets than the taxpayers and who would rather tie the city up in court than comply with the laws that apply to everyone else.

Well, here’s what happened. The city council passed a law protecting minorities from getting fired just for being minorities. Specifically, the city’s new law protects LGBT people from employment discrimination.

The CEO doesn’t like this law. What’s more, he thinks most people in the city don’t like it either. It’s quite possible he’s right about that. After all, laws protecting minorities from being treated unfairly wouldn’t ever come up in the first place unless it weren’t the case that a big chunk of the majority population was inclined to treat them unfairly. It’s often the case that a majority of the majority doesn’t like it when the law keeps them from taking advantage of a small minority.

I will now pause to allow you to decide for yourself whether or not this CEO is the Good Guy in this story.

The CEO filed his lawsuit after his petition drive failed. He didn’t manage to collect enough valid signatures to get his repeal initiative on the ballot.

But the CEO argues that he collected a whole bunch of valid signatures that were unfairly disqualified by election officials. If you count those, he says, then he’s got enough to get his repeal initiative. So he’s suing.

This lawsuit, in other words, isn’t about discrimination or anti-discrimination laws. It’s about something far more technical, mundane and boring. It’s about the electoral rules involving petition drives — about things like the number of signatures collected, how the validity of those signatures is determined, and the legitimacy of the tactics used to collect them. Some of those laws can be technical and complicated, but the function of such laws is quite clear: to ensure that all signatures represent actual people who intended to lend their name to the effort.

And that is why, in response to the CEO’s lawsuit, the city’s lawyers wound up subpoenaing the CEO’s speeches.

You can understand why such speeches are relevant to the matter of this lawsuit. The CEO’s descriptions of his petition in those speeches have a direct bearing on the legitimacy or illegitimacy of the methods he was using to collect signatures. The content of those speeches is essential to the legal questions the CEO’s lawsuit addresses. What instructions were given to those who were collecting signatures? Did those instructions comply with election law or not?

So no matter what you think of the anti-discrimination statute, or of the CEO’s position, or of the city’s position, the necessity of examining his public statements offering instruction, direction and support for his petition drive shouldn’t seem weird or unseemly or inappropriate. That’s the heart of the whole lawsuit.

The subpoenas filed by the city’s attorneys are utterly predictable, mundane, and unavoidable steps in the process the CEO himself began by filing his suit.

If there’s any whiff here of anything unseemly or inappropriate, it’s coming from the CEO’s sudden perturbation over the prospect of close legal scrutiny of the tactics and rhetorics he employed in his petition drive. He’s quite a bit more worried than we might expect someone to be if they were confident they had followed election law properly.

But here’s the wrinkle: I’ve streamlined some of the description above to make the outlines of this case easier to describe and to understand.

The actual lawsuit involves not just a single CEO, but several CEOs of nonprofit corporations in Houston, Texas.

And those CEOs are also clergy, and the nonprofit corporations they oversee are Christian churches.

Now, churches are not — legally — just exactly like every other business. And clergy are not legally just like every other CEO. Those legal differences are, in general, a very important thing.

Nothing in this case involves either the establishment of religion or the city attempting to restrict the free exercise thereof, so this doesn’t seem to raise any First Amendment issues.

The separation of church and state is an enormously important principle in American, but I don’t see what it would mean to invoke that principle here.

The separation of church and state does not forbid pastors and churches from participating in petition drives. Nor does it mean that pastors and churches are prohibited from filing a lawsuit against the city. But it also does not and cannot mean that when pastors or churches do file such lawsuits, they are magically exempt from the laws that govern such lawsuits or from the legal process and legal rules that the city and everyone else has to obey.

If the city’s subpoenas involved the speeches of a CEO in an otherwise identical lawsuit, no one would bat an eye at the obvious necessity of collecting and consulting such relevant material in the case.

What is it about the fact that these public speeches were sermons that significantly changes that?

For more on this legal battle: Off the Kuff; Marc Campos; Texpatriate; Snopes; Pat Robertson.

October 17, 2014 Left Behind Classic Fridays, No. 4: 'Meet the GIRAT'
Recent Comments
0 | Leave a Comment
Browse Our Archives
get the latest from
slacktivist
Sign up for our newsletter
POPULAR AT PATHEOS Progressive Christian
1