How fundies miss out on the fun (the Synoptic Problem is not that kind of ‘problem’) April 7, 2015 Fred Clark

On a shelf in my basement I have a handful of old volumes that purport to be “harmonies” of the Gospels. These were once a popular thing among fundamentalist types whose idea of what the Bible is, or of what they wanted the Bible to be, didn’t match up well with the actual Bible we’ve actually got. The actual Bible has four different Gospels. And those four different Gospels are, well, different.

For fundamentalists — and for white evangelicals who subscribe to the idea of “inerrancy” — this overabundance of Gospels is simply unacceptable. Four identical Gospels might be manageable, but Matthew, Mark, Luke and John are far from identical. They offer widely different chronologies. They change details. They relocate events and stories.

From the perspective of a fundamentalist or inerrantist, that just won’t do. And so they sit down and try to smoosh the four very different Gospels into a single, “harmonized” story. They try their best to turn the four Gospels of the actual Bible into a single Gospel that better aligns with their idea of what they need the Bible to be. 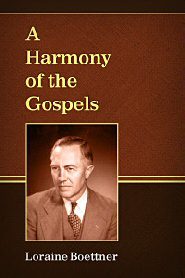 The various attempted “harmonies” I’ve got all take slightly different approaches to this task, but they all have one thing in common: They fail, utterly. The four Gospels of the New Testament refuse to be harmonized. That was kind of the point in having four of them to begin with (Well, actually, to begin with we probably had a lot more than four of them.)

Attempting to “harmonize” the Gospels is a fundie approach to what biblical scholars call the “synoptic problem.” It’s an approach that misunderstands that term — treating this “problem” as a mistake that needs to be corrected. And that’s what it is for fundies — an embarrassing “problem” that needs to be fixed in order to salvage their theory of what the Bible should be.

But that’s not what it means at all.

It’s a literary detective story. It’s an ancient puzzle challenging us to try to solve it. And it’s really, really cool.

That word “synoptic” refers to the first three Gospels — Matthew, Mark and Luke. It’s related to “synopsis,” from two Greek words meaning “viewing together.” Outside of biblical studies, the word “synoptic” also shows up in astronomy — as in the Large Synoptic Survey Telescope. The general idea there is the same. The LSST will be a wide array, capable of showing us more of the night sky than we could see from a single telescope and its single perspective. But that array will bring this wider perspective into a single broader picture.

We lump those three Gospels together like this because they’re all so closely related. They all contain identical or nearly identical chunks of text — whole stories that seem copied from one another. But if so, who was copying who? That is what we mean when we talk about the “synoptic problem.”

Think of it like this: You want to know how your favorite baseball team did on Opening Day, so you go to Google News and open the first three stories in separate tabs on your browser. The three stories have three different bylines, but you notice they’re all strikingly similar. It’s not just that they’re all describing the same events and the same game, but that they’re repeating whole paragraphs verbatim, or nearly verbatim.

If all you have to go on is those three stories, can you figure out which one was written first? Can you deduce how the others changed the first draft, or why they made the changes they did?

Now imagine doing this with texts that are old — almost incomprehensibly old. The Synoptic Gospels were written nearly 2,000 years ago. These are texts that are older than many of our ideas about what it means for a text to be a text.

Here’s a helpful summary of the puzzle, and of some of what we think we’ve figured out about it, from Paul Davidson:

The first three Gospels (the Synoptic Gospels) share most of their material in common and present it in mostly the same order. Sentences are often so similar that verbatim copying has obviously taken place, so it is clear that their relation is a literary one. The puzzle of just how this all happened is known as the Synoptic Problem.

For various reasons, it is now widely (almost universally) accepted that Mark, the shortest and simplest of the three, was written first; and that Matthew and Luke were written later, using Mark as their main source. For the majority of the material shared between the three Gospels (the “triple tradition”), it is easier to explain the similarities of Matthew and Luke with Mark as well as their differences if Mark is the original. In total, 97 percent of Mark is duplicated in Matthew, and 88 percent in Luke. …

A problem remains, however, with material contained in both Matthew and Luke that is not found in Mark — the so-called “double tradition.” The most widely held explanation here is the two-source theory, which states that Luke and Matthew were based on a lost collection of material called Q (from German Quelle, or “Source”) in addition to Mark. Other models dispense with Q and propose — for example — that Luke adapted both Mark and Matthew, or that Matthew adapted both Mark and Luke.

All of this has implications for how we interpret the meaning of these texts. By comparing what Matthew changed in adapting Mark to what Luke changed, we can learn a great deal about the themes and ideas each was trying to emphasize. Understanding the literary connections between these three texts can enrich and improve our understanding of each of them separately.

(Likewise, we can learn a lot about the meaning of John’s Gospel by examining its literary relationship — or apparent lack thereof — to the other three. John’s odd Gospel is like kryptonite to all those poor fundies trying to write their “harmonies.” In terms of our baseball analogy, it’s like clicking on a fourth news story and finding out it was written by Hunter S. Thompson.)

That’s all very important, too, but it’s not what I’m trying to emphasize here.

What I’m trying to emphasize here is that the “synoptic problem” is a really terrific puzzle. It is fascinating and tantalizing and, for lack of a better word, enormously fun.

And here, as in all things, fundamentalists seem scared of fun. I often criticize fundamentalism and inerrantism because it’s wrong. And it is wrong. But it’s flattened, fragile approach to the Bible isn’t just wrong, it’s also far less interesting than the real Bible really is.

April 7, 2015 Come high water will it stand
Recent Comments
0 | Leave a Comment
"Hadn't heard that particular flavor of it, but sure we'll go with that."
Nequam Feeling unknown and you’re all alone
"https://www.newsweek.com/ar...What's the definition of "insanity" again? 🤔"
reynard61 A night with Lot in Sodom, ..."
"I learned about it through this:https://en.wikipedia.org/wi...It and MTVs Liquid Television were fun to watch and ..."
reynard61 A night with Lot in Sodom, ..."
"Everyone reading a blog called Slacktivist ought to know about J. R. "Bob" Dobbs."
Illithid A night with Lot in Sodom, ..."
Browse Our Archives
get the latest updates from
slacktivist
and the Patheos
Progressive Christian
Channel
POPULAR AT PATHEOS Progressive Christian
1