You know Dasher and Dancer and Prancer and Vixen. You know all sorts of other Christmas-y characters too from the songs and stories of commercial folklore: Rudolph, Yukon Cornelius, Heat Miser, Nestor the Long-Eared Christmas Donkey, Frosty the Snowman, Jack Frost, the Little Drummer Boy, the Sugarplum Fairy, Ebenezer Scrooge, etc.

Some of these are from beloved stories, others are from pretty dumb stories, some are from both. They’ve all made a pretty penny for their creators or for others who’ve found a way to market them in songs and TV specials and greeting cards, ornaments, plush toys, etc.

But for every Rudolph and Frosty, there are a dozen such characters who never caught on. For instance, do you recall, the most cynical cash-in attempt of all … “Jingle-O the Brownie.”

Jingle-O was the B-side of a Tennessee Ernie Ford record in 1960, and he’d all but disappeared by 1961. Before managing to find this video on YouTube, the only place I’d ever heard the song was on the dreadful “Old-fashioned Christmas” channel of music piped-in throughout December at the Big Box. It seemed awful the first time I heard it. Subsequent listens — twice a day for the past week — have only made it seem worse.

The song failed so utterly that it’s difficult to learn anything more about it today. I don’t know if it was written by Ford or by someone else.** That writer, or their estate, is now getting tiny annual royalty checks from the Big Box or Muzak or Jim Kerr or whoever it is that programs our strange mix of Christmas music by dead artists.* Whatever the amount of those checks, I’m sure it’s a pittance compared to what they dreamed of when they recorded this clunker in the hopes of creating the “Rudolph.” As Tom Maxwell wrote last year, in one of the few places I’ve found to even acknowledge this song’s existence, “Jingle-O’s” appearance as the B-side to “Little Klinker: The Pup That Woke Santa Claus” underscores Ford’s “flop-sweat desperation to score a Christmas novelty hit.”

That’s really what makes this song stand out. It’s such a transparently blatant money-grab, made all the more cynical by the slap-dash, who-gives-a-sugarplum laziness of the lyricist, the composer, the musicians, and Ford himself.

Here it is. Here’s two minutes and three seconds that you’re bound to regret:

If you’re at work, or you’re just wise enough not to click play on that video, then here are the lyrics, as transcribed by me because: A) We should all marvel at the hack-work here; and B) I couldn’t find these lyrics anywhere else, and the Internet will never be finished until the lyrics to every song can be found somewhere on the Web. 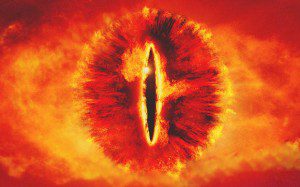 Now Jingle-O, he makes a trip
Each day in his red rocket ship
Around the world to see if
You’re being good or bad
He’s got a great big magic eye
That watches you from in the sky
And when he sees you acting mean
Poor Jingle-O is sad

He feeds the reindeer sugar flakes
And bakes old Santa chocolate cakes
He lights up all the Christmas trees
And rings the Christmas bells.
He is a busy little man
A-watching over Wonderland
For Jingle-O the Brownie
Is king of all the elves

As you’ve probably noticed, I don’t care for this song. And yet, after hearing it two or three times a day during the past week at the Big Box, I’ve started to care for poor Jingle-O himself. I feel sorry for him.

After the record flopped and the merchandizing deals for a line of toys fell through, I imagine things got worse for Jingle-O. He was reprimanded by the Gentleman with Thistle-Down Hair for allowing the mortals to refer to him as “king of all the elves” and became an outcast from the Brownie community.

Now he lives alone in a cheap hotel in L.A., embittered and resentful, yet still clinging to some dim version of the dream of stardom and Christmas fame. The closest thing he has to a friend is the guy at the corner liquor store who eventually took pity on him and, despite Jingle-O’s preternaturally youthful appearance, stopped asking to see his ID after one of his furious, profane outbursts (“Am I 21? I made toys for your %#@&ing great-grandfather you dumb $#@&!”) The guy puts up with him because loyal customers are his business, after all. But he’s learned to turn off the Christmas music when he sees Jingle-O coming. He doesn’t want a repeat of what happened a few years ago when “Rudolph” came on while the angry little guy was paying for his order.

So save a kind thought for poor Jingle-O this Christmas. He only did what he had to do, and now he’s growing old.

* I’ve been keeping track of all the living artists played on this Christmas channel. So far, there have been four: Tony Bennett (a bunch of standards), Tom Jones (pretty much the same bunch of standards), Barbara Streisand (an oddly morose “Favorite Things”), and David Bowie (that weird duet with Bing Crosby). The Bennett and Jones numbers are actually kind of fun — Bennett even almost succeeds in making “O Christmas Tree” swing. Also fun: Trying to fit the lyrics to “Space Oddity” and “Ashes to Ashes” into Bowie’s part of that “Little Drummer Boy” duet. I haven’t quite made that work yet, but I’ve got another 22 days to figure it out.

** Update: Thanks to @tiltaraiza, I’ve learned that “Jingle-O” was composed by Dick Reynolds (who also wrote “Silver Threads and Golden Needles” and “If I Ever Love Again,” fwiw). Thomas Lolakos gets credit (ahem) for composing “Little Klinker (The Pup Who Woke Santa Up).” I have no idea what other songs he may have written, but here at the Home of the Rayford we should mention that he lived in Arlington Heights, Illinois, and that his music and original plays live on through the Prospect Players, based in a local church near Mount Prospect.

December 2, 2015
LifeWay Research gets it backwards on abortion
Next Post