(This is the second of a two-part article on Naples; click here for the link to the first)

(Scroll to the bottom for Photo Gallery)

The Presepe of San Gregorio Armeno

The next stop on the pilgrimage route is not so much to a place as to a tradition: the famed Presepi (Nativity Scenes) of Naples.

Directly in front of the basilica of San Paolo Maggiore is a small square. Just beyond it is the narrow, crowded street known as Via San Gregorio Armeno. This is the center of Naples’s Presepe district.

The presepe in Italian derives from Latin, praesepium meaning “crib,” more colloquially referred to as the nativity scene. These crafts have a long and storied tradition in Naples.

As early as the High Middle Ages, artists began sculpting life-size nativity scenes of the Holy Family out of marble or wood, or later, papier-mâché. In the eighteenth century, the presepe reached its golden age in Naples. By then, they were no longer exclusively objects of religious devotion. Instead, the nobility and wealthy bourgeois had begun commissioning similar figures to decorate their aristocratic homes and compete with their neighbors. These models began to depict less and less Palestine at the time of Jesus and more and more Naples in the 1700s.

The Neapolitan Presepe tradition is still alive and vibrant along Via Gregorio Armeno. There are still workshops that have been run by families for generations constructing high-priced quality handcrafted scenes.

In addition to the traditional nativity scenes, there are other secular figures. Known as pastori (literally “shepherds”), these non-religious figures are based on popular stereotypes. They include every imaginable figure and personage from old-fashioned peasants, maidens, and street people to contemporary politicians, soccer players, prelates, and celebrities. The scenes are as boundless as the Neapolitan imagination.

In the true Presepe, however, all the scenes take place alongside the manger. Though in the streets of Naples, somewhere in the scenes can be found the Holy Family. Surrounded by angels, wise men, shepherds, oxen, and donkeys, the message is that Christ’s birth is not limited to a faraway place and time, but is right here with us.

Standing with your back to the church of San Gregorio Armeno, turn right and walk downhill for about 50 meters until you reach Via San Biagio Dei Librai. Turn right. Walk for about three hundred meters and you will notice a large square on your right with an obelisk. The elevated church behind it is San Domenico Maggiore.

Built over the remains of a smaller church from the tenth century, the current church was completed in 1324 by Charles I of Anjou and given to the charge of the Dominicans. The church boasts the tombs of notable personages as well as numerous works of art. Of note are 14th-century frescoes by Pietro Cavallini in the Cappella Brancaccio, and a fresco by Francesco Solimena on the ceiling of the sacristy.

Once part of the University of Naples, Saint Thomas Aquinas lived and taught for a time here. Inside is the room where the saint’s room. Another notable scholar who lived here was the Dominican philosopher, Giordano Bruno.

Very close to San Domenico Maggiore is the Cappella Sansevero. This is a museum containing numerous works of art in the Rococo style by some of the leading Italian artists of the 18th century.

Its most famous piece is the Veiled Christ. Sculpted by Guiseppe Sanmartino, it is known for its translucent tissue-like quality of the veil that covers the body of  Christ.

To get to the next stop, return to San Domenico Maggiore. Here you can walk along one of Naples’s most historic and charming streets: Spaccanapoli, the street that “splits Naples.” This was one of the three main east-west streets of the original Greek city of Neapolis.

As you walk along Spaccanapoli, go slowly and take in the heart of historic Naples. Though the dilapidated walls, speeding vespas, and street vendors may be off-putting, peek inside the numerous churches where you’ll frequently discover a glorious past. Don’t forget to sample authentic pizza at some point, as well.

From San Domenico Maggiore, Santa Chiara is 200 meters away on Spaccanapoli. Santa Chiara is the largest and one of the most impressive churches in Naples. Founded in 1310 by the Anjou dynasty, the Franciscan complex boasts the church of Santa Chiara, a beautiful cloister and convent, tombs, and an archeological museum.

The main nave, a large space with no side aisles, gives it a rectangular feel and can seem simple in its grandiosity. The church was partially destroyed by Allied bombardment in World War II and reconstructed and completed in 1953. The stained-glass windows fill the space with a gentle colored light. There are numerous tombs from royalty throughout the church and complex.

The cloister can be reached through a courtyard on the north side of the church, near the bell tower. Dating from the 14th century, the large cloister was transformed into an elegant garden in the mid-eighteenth century. The beautiful majolica tiles (glazed ceramic) are also from this period. The arcades are decorated with frescoes, though in need of restoration.

The museum houses illustrations on the history of the church, archaeological discoveries, and items that survived a fire that destroyed part of the church in 1943. It also boasts an impressive collection of baroque presepi (nativity scenes).

Nearby Santa Chiara is another storied church, Gesù Nuovo. Originally a palace built in 1470 for Roberto Sanseverino, the Prince of Salerno, it passed to the Jesuits the following century. It is beautifully embellished and endowed with numerous chapels and tombs of personages from centuries past.

Along the right side of the nave, however, is buried a contemporary saint: St. Giuseppe Moscati. He was a physician from the early twentieth century who blended his faith with science in his practice. Having taken vows of consecration, he served the poor free of charge and frequently “prescribed” the sacraments as well as medicine.

In the back of the church, there is a chapel dedicated to him. It includes the reconstruction of his medical office, numerous relics, and books and articles about him him. His house, located on Via Cisterna d’Olio, is just 150 meters from the church.

If you have a few days in Naples, there are numerous culturally and historically significant sites in the region recognized the world over. The Amalfi Coast, Capri, the Palace of Caserta, the Roman ruins of Pompeii and Herculaneum, are all an easy day trip away. 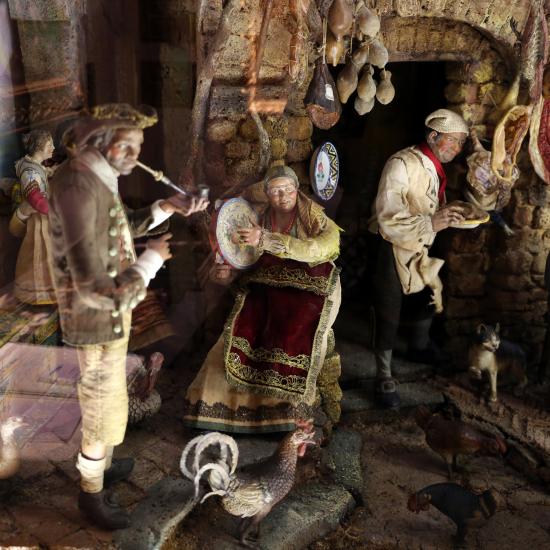 January 20, 2021 THE INCORRUPT SAINT JAMES OF THE MARCHES (1393-1476)
Recent Comments
6,774 Comments | Leave a Comment
Browse Our Archives
Related posts from The Franciscan Pilgrim

Catholic
WHAT PADRE PIO SAID WHEN ASKED ABOUT THE...
The Franciscan Pilgrim

Catholic
A CATHOLIC PILGRIMAGE TO MILAN
The Franciscan Pilgrim

Catholic
A DAY PILGRIMAGE IN NAPLES, PART I
The Franciscan Pilgrim
TRENDING AT PATHEOS Catholic